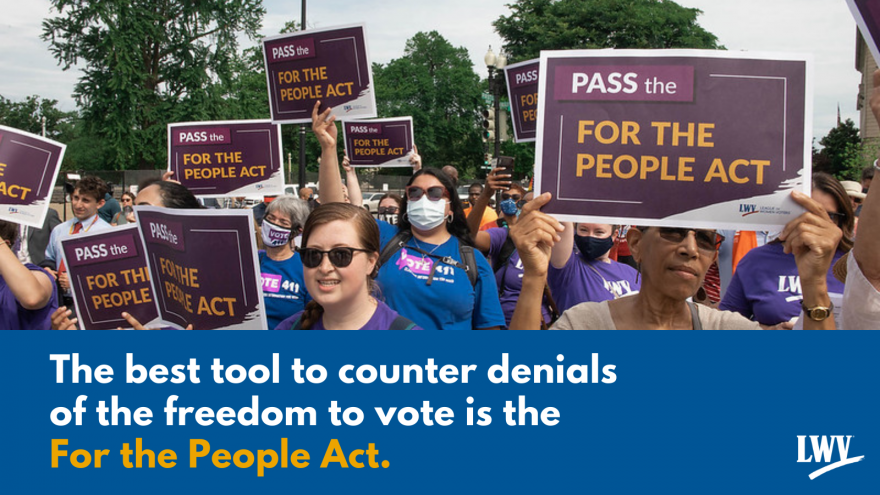 Since its founding, the US has made tremendous strides to improve and expand democracy. But there have also been some dangerous movements that have set back voting rights.

The For the People Act is a crucial piece of legislation that the nation and its people deserve. It encapsulates many reforms that will help create a healthy and inclusive democracy while setting national standards for protecting voting rights. Since its introduction in 2019, the For the People Act has come a long way. Now we have a real chance to make its promises a reality.

The For the People Act is coming up for a vote in the Senate the week of June 21st, and it's more important than ever to see it over the finish line.

The vote on the For the People Act could not come at a more vital time. In just the first few months of 2021, the nation has seen a surge of anti-voter bills. These bills are an existential threat to our country and the promise of "one person, one vote." They put forward oppressive measures and unjust barriers that make our fundamental right to vote increasingly difficult, particularly for Black and brown Americans. The regressive nature of these anti-voter bills is reminiscent of the Jim Crow era.

The best tool to counter these denials of the freedom to vote is the For the People Act.

The For the People Act goes a long way to put the power back into the hands of the voters.

It’s easy to see why the upcoming vote is so vital. If we want the reality of American democracy to truly live up to its promise, we must implement all the reforms within the bill. These reforms already have widespread bipartisan support across the country and will help all Americans.

The For the People Act is the fair representation bill that the American people want and deserve. The fight for these reforms has been long and hard, but this vote will test the government's commitment to American democracy.

Please make your voice heard: contact your senators today and tell them to vote YES on the For the People Act next week – and then join our Friendbank to share this crucial work with your loved ones!

Now is the time to act. Tell your friends, family, and community to hold their senators accountable and ask them to vote YES on the For the People Act and make the promise of democracy true for us all!