Why "We're Not About to Turn Around": Honoring Martin Luther King's Fight for Voting Rights 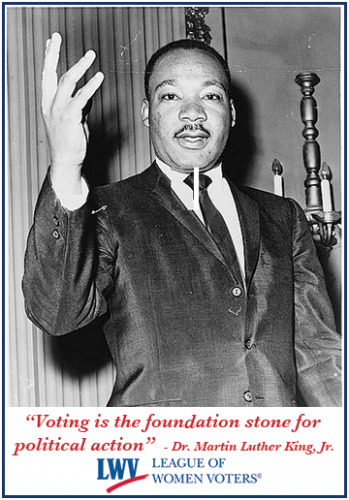 This week, we honor the life of civil rights crusader Dr. Martin Luther King, who fought to end racial discrimination. King played a critical role in the passage of the Voting Rights Act (VRA) of 1965, the monumental legislation that ensures that every American citizen, regardless of race, has equal access to the vote. But today, King's work is severely threatened. In June, the U.S. Supreme Court gutted the Voting Rights Act, a move that has led to a full frontal attack on the voting rights of all Americans.

The League is pleased that Congress has taken action and introduced strong legislation on behalf of all voters' rights. As we honor King's work, we are in urgent need of modern, common sense legislative fixes to realize his vision that every American is treated fairly at the ballot box.

Blog
People Powering the Vote: League Leaders and the fight for the VRAA