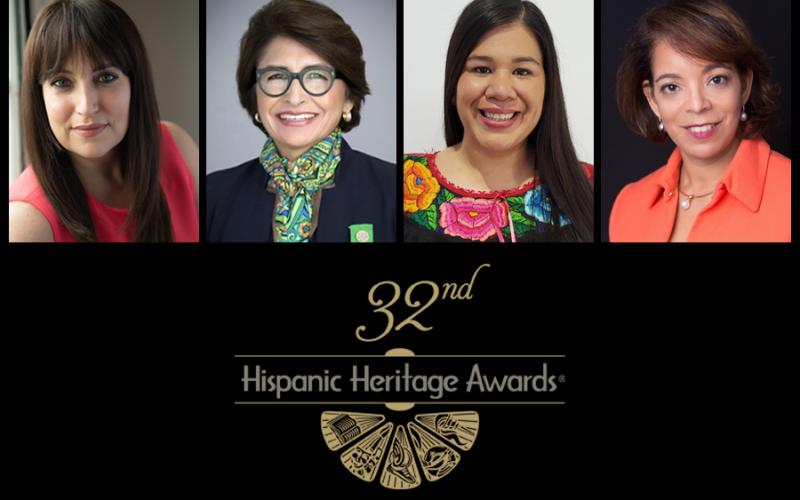 WASHINGTON, DC  – The Hispanic Heritage Foundation (HHF) today announced that Sylvia Acevedo, CEO of the Girl Scouts of the USA, Alejandra Y. Castillo, CEO of YWCA USA, Virginia Kase, CEO of the League of Women Voters; and Mónica Ramírez, Founder of Justice for Migrant Women and Co-Founder of Alianza Nacional de Campesinas who  helped spark the TIME’S UP movement, together will receive the Hispanic Heritage Award for Leadership at the John F. Kennedy Center for the Performing Arts in Washington, DC, on October 1, 2019.  The Leadership Awardees will join Film Awardee Eugenio Derbez and Sports Awardee Canelo Alvarez (other Honorees will be announced over the next month).

“The Hispanic Heritage Foundation is honored to recognize the tremendous impact of Sylvia, Alejandra, Virginia and Mónica at this critical moment for our community,” said Jose Antonio Tijerino, President and CEO of HHF. “As Latinos, we collectively turn to our Latina leaders to move our community and country forward by transforming the lives of millions upon millions of women and girls through these quintessential American organizations and others they have created to fill needs in our community.  These four leaders truly represent the important role Latinas play in our community.”

The Hispanic Heritage Awards were created out of the White House in 1987 to commemorate the establishment of Hispanic Heritage Month in America and are considered among the highest honors by Latinos for Latinos and are supported by 40 national Hispanic-serving institutions.

The other 2019 Honorees will be announced over the summer followed by the performers, hosts and presenters (visit https://www.youtube.com/watch?v=C92ZiK5MxAs).  Sponsorship opportunities for the Hispanic Heritage Awards are available.

Sylvia Acevedo is an engineer, rocket scientist, tech entrepreneur, and the CEO of Girl Scouts of the USA. She began her career at NASA’s Jet Propulsion Laboratory, where she created algorithms and analyzed data from Voyager 2’s spacecraft flyby of Jupiter and two of its moons, Io and Europa. She went on to work as an engineer and executive at Apple, Dell, Autodesk, and IBM. Sylvia was appointed CEO of Girl Scouts of the USA in 2017 after serving on the Board of Directors, coming full circle from her youth as a Girl Scout in Las Cruces, New Mexico, where she developed a passion for space and astronomy, then becoming one of the first Latina/o’s to earn their Graduate Engineering Master’s Degree from Stanford. Her bold initiatives as CEO have underscored the organization’s commitment to serving all girls with cutting-edge, research-backed, and girl-centered programming that ensures the country’s workforce pipeline is filled with true go-getters, innovators, risk-takers, and leaders—what Girl Scouts call G.I.R.L.s.  Sylvia is the author of Path to the Stars: My Journey from Girl Scout to Rocket Scientist, a memoir that inspires middle school readers to live the life of their dreams.

Alejandra Y. Castillo is the CEO of YWCA USA which serves 2.2. million women and girls around the country with a network of over 200 associations. YWCA plays a dual role as both a social service provider and an advocate for reform and justice. In communities big and small, local associations provide service around gender-based violence, job training, racial justice, childcare, and more. YWCA also advocates fearlessly for institutional reform and systemic change. With over two decades of professional experience in policy, legal, and business sectors, Castillo has served in senior leadership for the Clinton and Obama Administrations as well various public, private and non-profit settings. With the Obama Administration, Castillo served as National Director of the Minority Business Development Agency (MBDA), becoming the first Latina to lead the agency, which secures financing and capital in excess of $19 billion and creating or retaining over 33,000 jobs. Castillo holds a Bachelor of Arts degree from the State University of New York at Stony Brook in economics and political science; a Master of Arts degree in public policy from the Lyndon Baines Johnson School of Public Affairs, University of Texas at Austin; and a Juris Doctorate from American University, Washington College of Law. Alejandra is an active member in various civic and professional organizations and serves on a number of boards.

Virginia Kase is a 25-year veteran in the fight for social justice and civil rights currently she is CEO at the League of Women Voters of the United States, a 99-year-old non-partisan organization with over 760 affiliates throughout the country and more than 400,000 members and volunteer activists.  Kase is leading the historic organization through a period of rapid transformation and growth focused on building power by engaging in advocacy, legislation, litigation and organizing efforts centered around issues of voting rights and democracy reform.

Prior to joining the League, she served as COO of CASA, a social justice and civil rights organization at the forefront of the immigrant rights movement representing nearly 100,000 members. Virginia’s career started in her early 20’s when she co-founded a youth-led non-profit in her hometown of Hartford, CT organizing current and former gang members and other at-risk youth and sought to provide them with a pathway out of a destructive lifestyle through leadership development and access to employment and educational opportunities.  Raised by two incredible women, one white and one Puerto Rican, Kase is grateful to call both mother, one who gave her life and one who helped raise her, in the Hispanic community as her own, which inspired her to dedicate her life’s work to fighting for social justice and civil rights. Virginia is a graduate of the University of Maryland and writes and speaks on issues impacting our democracy.

Mónica Ramírez is a long-time advocate, organizer, and attorney fighting to eliminate gender-based violence and promote gender equity. In 2003, Mónica created the first legal project in the United States specifically focused on addressing gender discrimination against farmworker women which she later expanded in 2006 when she founded Esperanza: The Immigrant Women’s Legal Initiative of the Southern Poverty Law Center. In 2011, she co-founded Alianza Nacional de Campesinas. In her role as Alianza’s Board President, Mónica wrote the “Dear Sisters” letter to women in the entertainment industry that was published in TIME magazine on November 10, 2017. This letter has been credited with helping to spark the launch of TIME’S UP.  In 2014 she founded Justice for Migrant Women to focus on the eradication of workplace sexual violence against migrant women workers, as well as to promote the human rights of migrant women and their families. She currently serves as the President of Justice for Migrant Women and the Gender Justice Campaigns Director for National Domestic Workers Alliance.

About the Hispanic Heritage Foundation

The Hispanic Heritage Awards serve as a launch of HHF’s year-round, award-winning programs which inspire, prepare and connect Latino leaders in the classroom, community and workforce to meet America’s needs as well as promoting cultural pride.  HHF is a 501(c)(3) nonprofit organization.  For more information on the mission of HHF visit www.hispanicheritage.org.