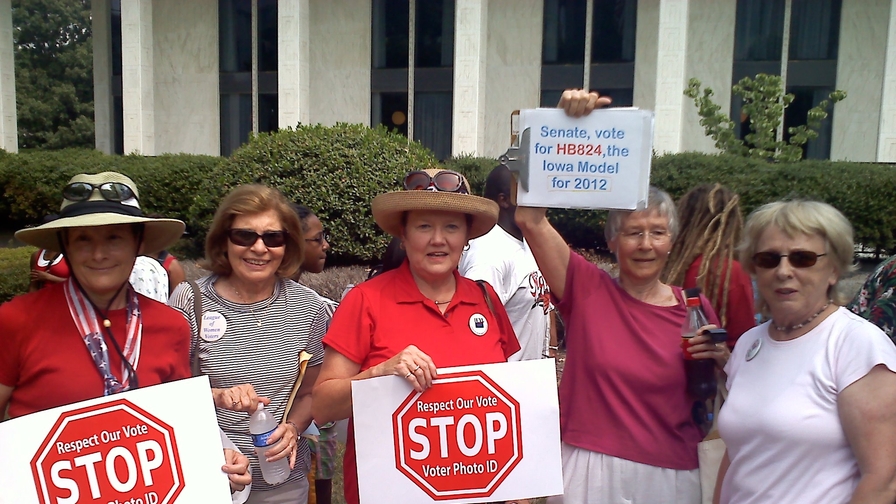 The North Carolina League has seen a whirlwind of activity in the last week, speaking out across the state on behalf of voters.  On July 7, League leaders testified or submitted comments at multiple public redistricting hearing held by the joint House and Senate Redistricting Committee. Leaders focused their comments and media outreach on the grave concerns they have regarding what appear to be blatantly racially gerrymandered districts designed to dilute minorities’ voting strength under the state’s proposed legislative and congressional maps.  Days later, League leaders were out in full force in Raleigh to urge the legislature to “Respect the Vote”; speaking at a high-profile public rally where they called upon legislators to reform the state’s deeply flawed redistricting process and also fight back against renewed efforts to override the recent veto of a photo ID bill and do away with pro-voter reforms such as same-day registration and early voting.

Raleigh, NC—As the Joint House and Senate Redistricting Committee held a series of hearings across the state today to gain public input on proposed redistricting plans, the League of Women Voters of North Carolina was out in force to offer analysis and provide recommendations for improving the statewide redistricting process.  League representatives testified at or attended at several of the public hearings held across the state, and LWVNC president Jo Nicholas released the following statement:

“For North Carolina to comply fully with federal and state law, including the Voting Rights Act, the redistricting process must be transparent, open, and responsive to constituents. While we applaud the Committee for the efforts it has taken to ensure transparency and invite public input, we are deeply concerned that the proposed plans repeat the mistakes that have shortchanged all of us—the voters—for decades.

“The proposed Congressional and state legislative maps are drawn with one outcome in mind: to maximize partisan gains while diluting the power of minority of voters.  These maps attempt to ‘pack’ minority voters into districts in order to stifle their influence.

“Every redistricting brings renewed tactics designed to manipulate redistricting for partisan gain, and this year is no different,” Nicholas concluded.  “Before green-lighting any redistricting plan, lawmakers must incorporate a broader spectrum of voices and ideas for drawing districts that best represent the interest of all North Carolinians.”

LWVNC has testified at multiple hearings held by the Redistricting Committee and is available for further comment upon request. More information can be found at www.rtpnet.org/lwvnc.
###
The League of Women Voters of North Carolina, a nonpartisan political organization, encourages the informed and active participation in government and influences public policy through education and advocacy.