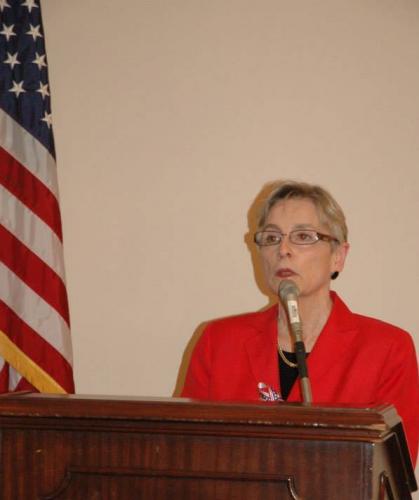 For all of 2015, we’ve been celebrating the 95th anniversary of the League of Women Voters. When Carrie Chapman Catt founded the League, she charged our organization to “finish the fight,” in anticipation of the final ratification of the 19th Amendment securing women the right to vote that occurred 95 years ago this month. The League has embraced that charge for the last 95 years and our members and supporters have fought to keep the power of democracy in the hands of the people by empowering voters to tackle the most important issues facing our communities and to engage with and improve their government at the local, state and federal levels.

This year has taken on personal importance to me as well. I will be stepping down in a few weeks after 15 years as the League’s executive director. When I accepted this role in 2000, it was just before the now infamous 2000 presidential election – the election that clarified just how important each single vote can be and shed light on some of the inadequacies of our election system. As I depart, I am confident that the League will continue to work to ensure that every eligible voter can and will participate in our democratic system, and that their voices are not minimized by burdensome laws, unfair redistricting or special interest money.

Over the last 15 years a lot has changed across the world and the country. In addition to crises like the 9/11 terrorist attacks and the international economic recession, we’ve seen increased political polarization and distrust in government. Yet we’ve also seen tremendous expansion of the ways that people can interact with one another as well as with their government officials, particularly through the explosion of online communications channels. The League has sought to meet the needs of voters by promoting new ways to modernize and improve our elections systems, including promoting online voter registration systems that are not limited to those with a driver’s license or a signature on file in their state. We also developed VOTE411.org, a one-stop shop that has been used by millions of voters since its inception in 2006 to provide trusted and easily-accessible information about election laws in each state, polling place locations and what’s on a voter’s ballot. Our volunteer members support and supplement this resource by registering voters and sponsoring candidate and issue forums to ensure that voters have the elections information they need.

In addition, the League has continued to speak out on issues related to the health and welfare of our country, specifically defending our environment from the challenges posed by climate change, advancing access to affordable and quality healthcare and reforming our immigration system. And we have never wavered in our efforts to increase government transparency and accountability.

The League’s nonpartisan, grassroots approach to empowering voters and improving government systems and policies continues to be the source of our reputation as a well-known and highly trusted organization. This credibility is valued not only by the public, but also by a wide range of coalition partners and the federal government. As a result, the League has often been called upon to be a trusted messenger on critical issues. In 2012, for instance, the US Department of State asked the League to be its only non-governmental partner to help emerging civic groups in North Africa and the Middle East interact with their own governments.

As the League marches towards our 100th anniversary, we’re making sure to recognize and celebrate our past successes, like the signing of the National Voter Registration Act and the Bipartisan Campaign Reform Act, the establishment of the United Nations and our valued role in holding presidential and many other candidate debates. At the same time, we are planning for the future, making adaptations where necessary to ensure the League’s continued success in Making Democracy Work®. These dual goals enable us to celebrate our proud history while also maximizing our effectiveness in the new century.

I am proud to have been part of this important chapter in League history, and I am confident that the League will continue its work to make American democracy as good as the ideals on which the country was founded. The League’s credibility and strong network of supporters are positioning the League well for its 100th anniversary in 2020 – and beyond. And I’m looking forward to seeing where the League goes from here.