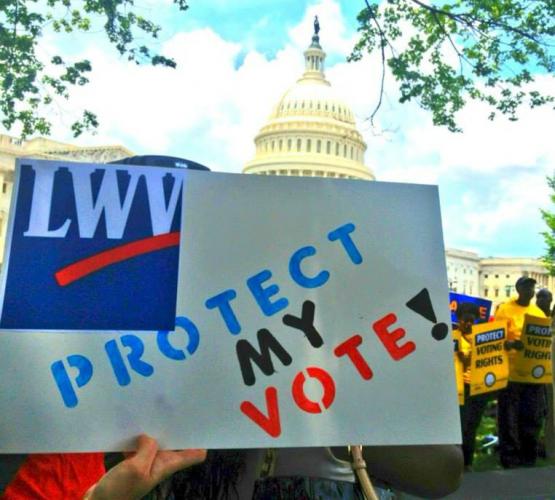 Leagues across the country can expect to have a busy 2016 legislative session, with the majority of state legislatures beginning their sessions in January. Many state legislatures will be debating critical issues, which could include possibly changing election laws in the middle of a major election year. This could create significant and unnecessary confusion for voters. Voters' rights and election laws will be brought to the forefront once again in 2016, and with elections at every level of government, the stakes couldn’t be higher.

State Leagues often take on leadership roles when advocating for voters' rights, and next year will be no different. With so much at risk during the 2016 legislative session, the League of Women Voters will continue to fight for pro-voter reforms, building upon the many successes we helped secure in 2015, and against voter suppression tactics to ensure that access to the ballot box remains fair, free and accessible.

Access to the ballot was expanded in big ways in 2015 too, with new laws creating early voting, online voter registration systems and same day registration. While not all of the legislation pushed by state Leagues passed at the state level, Leagues educated the public, legislators and the media on the importance of strengthening our democracy through pro-voter reforms.

The other big trend from 2015 that we expect to continue into the 2016 legislative session is automatic voter registration (AVR), with over states 18 states filing or pre-filing automatic registration bills already. The League of Women Voters of Oregon and California were part of the coalitions driving AVR forward in their states, paying close attention to bill language to ensure that the new system of registration does not negatively impact underrepresented communities. Of biggest concern to the League is the ability for non-citizens to opt out of the registration process – if automatically registered through no fault of their own, non-citizens could face consequences that range from federal fines to deportation. In 2016, Leagues across the country will continue to keep a close eye on this new trend and will continue to push for legislation that creates a fair and transparent system while greatly expanding access to the ballot.

Leagues are already taking steps to push back on bills attacking voters’ rights that are coming, or that are already in place, while at the same time bringing attention to pro-voter reforms that will increase voter participation in their states. While there will be no shortage of voting related legislation introduced in 2016, the League is mobilizing grassroots support for pro-voter reforms that will make access to the ballot box across the country fair, free and accessible.

Blog
We've Voted: What Happens Next?