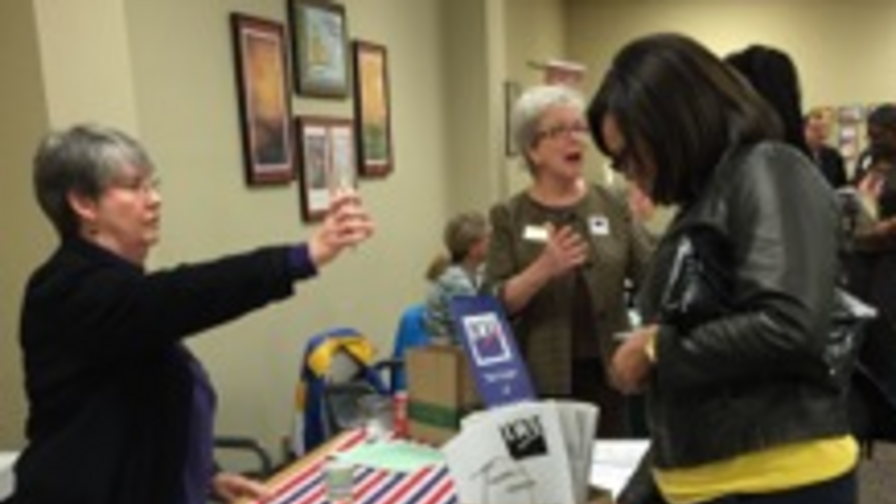 Being Part of the Solution in Ferguson

EDITORIAL NOTE: This guest blog post was written by Linda McDaniel and Kathleen Farrell, co-presidents of the League of Women Voters of St. Louis.

At a local government candidate training workshop in December, the League of Women Voters of St. Louis (LWVSTL) registered voters and provided elections information. An older woman approached our table. We asked her if she was registered to vote. She looked up and responded quietly: “People died so that I could vote. I never miss an election.” While other younger individuals also told us they were registered, a number said that they felt there was no reason to vote. When Ferguson exploded in August, so did the reality of this political situation. Residents of Ferguson register and vote in low numbers. Many young people don’t vote at all.

While these anecdotes and numbers can be disheartening, they also demonstrate immense opportunity and potential. The League of Women Voters of St. Louis is excited to help engage and empower Ferguson residents to take part in their government and wield influence over their community moving forward. We began immediately to work with community groups to address these problems. We have partnered with organizations that share our values and have primarily African American memberships – Power to the People, the Urban League, the NAACP, Beyond Housing and numerous African American churches.

We registered voters at the Urban League’s job fair in Ferguson and held six other voter registration events in Ferguson seeking to get voters registered in time to participate both in the November elections as well as for the upcoming local elections. We helped prepare potential local office candidates to run campaigns. In the lead-up to the November elections, a group of African American churches asked us for 2,800 extra copies of our Voters' Guide, which our partner, the St. Louis Post Dispatch gladly supplied.

As individuals we attended a number of town hall meetings to participate in the difficult conversations about race and justice in our community. We have listened and been asked difficult questions both about society and also about the League specifically: Why should we vote when there is no one good to vote for? Why should we vote when nothing ever changes? Why aren’t there more African Americans in the League? The League welcomes a diversity of voices into our organization and we remain committed to tackling these issues together with our neighbors. Ultimately, we want our government as well as our League to reflect the community represented.

Following the elections, we’re committed to continuing this work. We’re hosting candidate forums for the Ferguson City Council, the Mayor of Jennings (a town right next to Ferguson with a largely African American population). We are fighting a battle in the state legislature to defeat the suppressive voter photo ID legislation introduced for the sixth consecutive year. And we are working to increase our work with youth and newly naturalized citizens to increase their participation in local government. As part of this work we will be talking directly with new voters about how important their voices are in building a stronger community and a more representative democracy.

We don’t have all the answers and the questions and challenges keep coming. Many in our community are still angry and frustrated. But we are heartened by the constructive voices who are calling for reform. We believe one answer is to increase democratic participation everywhere in our community. The answer lies in empowering people to vote and have their say on the difficult issues we face. We’re trying to be part of the solution and are invested in Making Democracy Work® in Ferguson.

To learn more about the work of the League of Women Voters of St. Louis, follow them on Facebook.