Breaking Down the Partisan Gerrymandering Cases Before the U.S. Supreme Court 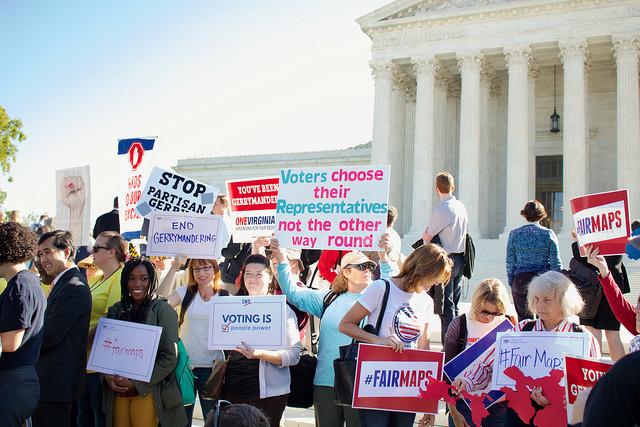 The set of gerrymandering cases before the U.S. Supreme Court this spring is easy to remember if you think of a movie production countdown: “3-2-1, Action!” It’s 3 cases, 2 sets of legal arguments, all happening on 1 day, March 26, 2019. The three cases hail from two separate state redistricting plans: two Rucho cases out of North Carolina, and the Benisek case out of Maryland. While all of these cases assert First and Fourteenth Amendment claims, each case offers uniquely different positions. Let’s break them down.

Background: This case began in 2011 as a racial gerrymander claim, challenging the North Carolina congressional district plan. The complaint argued that African American voters were unnecessarily concentrated or divided in 12 of 13 districts, thus diluting their voting power. This tactic is known as ‘packing and cracking,’ and it is in violation of the Constitution's ‘one-person, one-vote’ principle. A federal court ruled in 2016 that the maps were, in fact, a racial gerrymander and required the legislature to redraw the maps to correct the issues. The legislature’s revised maps addressed the racial gerrymander but created a partisan gerrymandered plan, which led the League of Women Voters of North Carolina to file a lawsuit challenging the map as a partisan gerrymander. Specifically, LWVNC’s case argued that the updated map targeted Democratic voters and also penalized voters who associated with the Democratic party. This led to the strangling of North Carolina voters’ First Amendment rights to associate. Additionally, the redistricting plan stripped North Carolina’s Democratic voters of their right to equal protection under the Fourteen Amendment.

Legal Theory: Unconstitutional gerrymandering is the phenomenon that occurs when voters of a ‘disfavored’ party are intentionally concentrated into a minimal number of districts (‘packed’) or divided across many districts (‘cracked’) in order to dilute the strength of their vote and their ability to elect their candidate of choice. The League of Women Voters of North Carolina case proposes a three-part test to determine whether the packing and cracking in a state’s district map reaches unconstitutional levels: (1) did the legislature have an intent to increase their political power by diluting the power of voters of the other party?, (2) does the legislature’s plan accomplish the intended effect?, and (3) was there a legitimate legal reason for doing so? When plaintiffs are able to prove (1) intent and (2) effect, and the defendant is unable to prove (3) legitimate reason, an unconstitutional partisan gerrymander has occurred.

Our legal theory also outlines a variety of metrics aimed at achieving a mathematically workable standard to measure the overall degree of fairness or unfairness of the map. The previous federal courts successfully applied this test, and it is our hope the U.S. Supreme Court will agree that this test is appropriate to determine when the gerrymandering process goes too far.

Background: Common Cause filed a lawsuit claiming that North Carolina’s remedial 2016 congressional map – adopted by the North Carolina legislature after an earlier map was struck down – is an unconstitutional partisan gerrymander in violation of the First Amendment, the Equal Protection Clause, and Article I, sections 2 and 4, of the U.S. Constitution. The plaintiffs argue that this remedial map favored some voters and penalized others for their political party memberships and affiliations, thereby affecting the state government’s ability to maintain political neutrality when distributing political representation and power. The three-judge panel hearing the case denied the state's motion to dismiss on March 3, 2017, and consolidated the case with League of Women Voters v. Rucho.

Legal Theory: Like the League’s North Carolina case, the Common Cause case proposes the same three-part test to determine whether a map’s packing and cracking reaches unconstitutional levels (summarized): (1) intent, (2) effect, and (3) legitimate reason. The Common Cause legal theory focuses on the legislature’s intent to create a Democratic or Republican district and avoids any analysis of the overall fairness of the map.

Background: Plaintiffs filed a complaint in a Maryland federal court on November 5, 2013, challenging the congressional redistricting plan enacted by the Maryland General Assembly after the 2010 Census. Plaintiffs contend that the district plan was a partisan gerrymander which violated the right of Republican voters to representation of their choice as guaranteed by Article 1, Section 2, of the U.S. Constitution, and the First Amendment’s protection of political association. After a dismissal of the case in 2014 and an appeal affirming the dismissal, the plaintiffs appealed to the U.S. Supreme Court. There, the Court held that the lower courts had been too dismissive of the plaintiffs’ partisan gerrymandering claims and rejected their decision to dismiss the case. Now the case is back at the Supreme Court after another series of appeals.

Legal Theory: Plaintiffs’ claims center on the unconstitutionality of Maryland’s 6th Congressional District, in which voters elected a Republican in the 2010 election but which a Democrat has consistently represented since it was redrawn in 2011. The Benisek First Amendment legal theory is narrower than the Common Cause legal theory in that it looks only at districts that have been flipped. However, the two theories share a focus on the ways to analyze constitutional harms and provide a roadmap, the three part test, for lower courts to determine when votes of disfavored party are rendered less effective through a redistricting plan designed by the other party.

All three cases tout the importance of providing evidence of discriminatory intent as a paramount consideration, and all three follow the Supreme Court’s guidance on establishing standing based on personalized harm. Arguably, the gerrymandering designs of North Carolina and Maryland are the most egregious examples in which elected officials made ‘no bones about’ an intent to discriminate against disfavored voters and create unfair maps. These cases present extremes in gerrymandering, and the litigants (disfavored voters) seek to rein in the worst gerrymanders to restore voters’ faith in the voting process. Ultimately, the cases seek a court decision that will reinforce voter faith that it is unconstitutional when redistricting plans are done in a way that prove that the electoral outcomes are determined before a single ballot is cast.

The cases will be argued at the U.S. Supreme Court on March 26, 2019. The League of Women Voters and Common Cause are hosting a rally on the steps of the court the day of these oral arguments, and we encourage all members and supporters to join us to show support for fair districts these landmark cases. To RSVP for our rally in front of the U.S. Supreme Court on Tuesday March 26 and to learn more about this event, visit our Facebook Event Page.

Blog
In the Know: League of Women Voters v. Rucho

The League of Women Voters of Maryland joined as amici on a brief filed in the U.S. Supreme Court case Lamone v. Benisek.