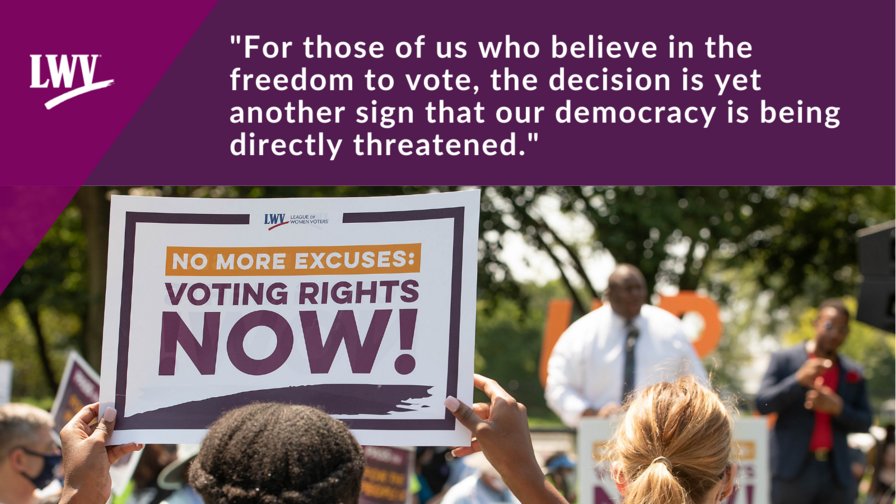 Brnovich: A Significant Blow to Our Freedom to Vote

On July 1, in Brnovich v. Democratic National Committee, the Supreme Court dealt a significant blow to the freedom to vote. The decision held that Arizona laws discounting ballots cast out of precinct and banning nonrelative neighbors or friends to deliver mail-in ballots did not violate Section 2 of the Voting Rights Act of 1965 (VRA), despite these laws’ negative effects on Black and brown voters. It is a major loss for voting rights at a time when this sacred freedom is under attack across the nation.

The League of Women Voters of the United States CEO Virginia Kase Solomón issued a statement in response to the Supreme Court’s decision:

“The Court’s ruling today is a devastating blow to our democracy and will clear the way for states to pass discriminatory laws, put up barriers to voting, and chase problems that do not exist.”

But what does that mean?

Section 2 of the Voting Rights Act

As is stated above, the Brnovich decision hinged on the determination that Arizona’s laws did not violate Section 2 of the VRA.

Section 2(a) of the VRA makes it illegal for states to pass any law that “results in a denial or abridgement” of the right to vote “on account of race or color.” This can happen in one of two ways:

Put simply, Section 2 of the VRA prohibits any standard, practice, or procedure imposed or applied to deny or limit the right to vote on account of race or color. 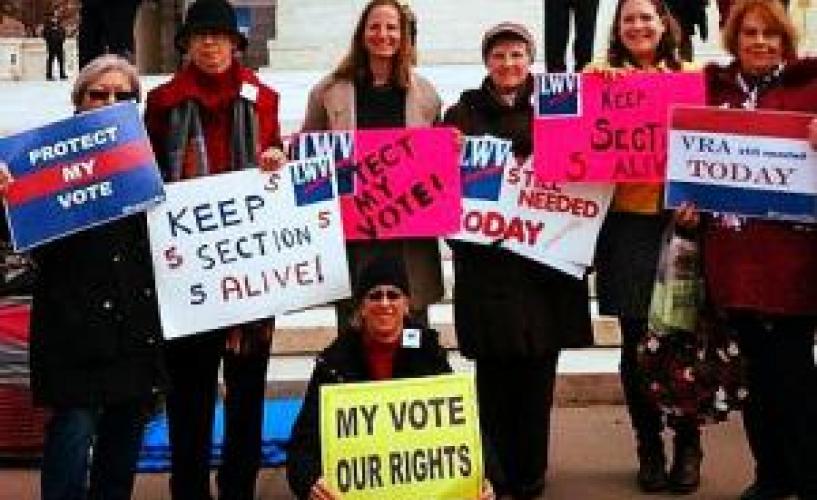 This means that so long as the openness to voting remains technically available to all people, even if that availability is close to impossibility for certain groups, a law does not violate the VRA.

Justice Alito, writing for the majority in Brnovich, declined to set up a test to fully evaluate Section 2 claims, but offered five “guideposts” to consider when evaluating a voting policy:

The majority in Brnovich suggested that the most important guidepost is the fifth one: the strength of a state interest (in this case, an interest in voter fraud). Yet the Court's majority completely sidestepped the third guidepost: disparate impact, as championed by Justice Kagan in her dissent.

Disagreeing with the majority decision, Justice Kagan pointed to the discriminatory impact of recent anti-voter laws. Indeed, the Arizona laws have had a harsh impact on voters of color; in 2020, the U.S. Court of Appeals for the Ninth Circuit found both of Arizona’s policies to be discriminatory because of their impact on real-life conditions for minority voters. A brief filed by the Navajo Nation noted: “Arizona’s ballot collection law criminalizes ways in which Navajos historically participated in early voting by mail. Due to the remoteness of the Nation and lack of transportation, it is not uncommon for Navajos to ask their neighbors or clan members to deliver their mail.”

In 2020, the U.S. Court of Appeals for the Ninth Circuit found both of Arizona’s policies to be discriminatory because of their impact on real-life conditions for minority voters.

Brnovich sets a dangerous precedent for future voting rights cases. Since the Court's majority did not find any discriminatory intent in Arizona’s policies, other states may follow in Arizona’s footsteps and pass anti-voter laws which disparately affect minorities. This is a crushing blow to voter access.

What’s Next for the Freedom to Vote?

Since the 2013 Shelby Co. v. Holder decision that gutted key protections from the Voting Rights Act, there has been a sharp increase in the number of anti-voter policies across the country. Too often, they disenfranchise Latinx, Native American, and Black voters. The Brnovich decision will only exacerbate this trend.

For those of us who believe in the freedom to vote, the decision is yet another sign that our democracy is being directly threatened. There is no time to waste in advocating for pro-voting laws and policies; we cannot look back years from now and ask why we failed to act at this major turning point.

Here are a few actions you can take:

The time for action is now. Let’s get to work.

In light of today’s ruling, it is more important than ever that Congress act quickly to pass the John Lewis Voting Rights Advancement Act and the For the People Act.

With hundreds of restrictive voting proposals being introduced following the 2020 election, Brnovich could determine how we treat discriminatory laws in our judicial system.

Blog / May 11, 2021
LWV Reacts to Supreme Court Decision on the Voting Rights Act

The League of Women Voters statement on the U.S. Supreme Court decision regarding the Voting Rights Act.