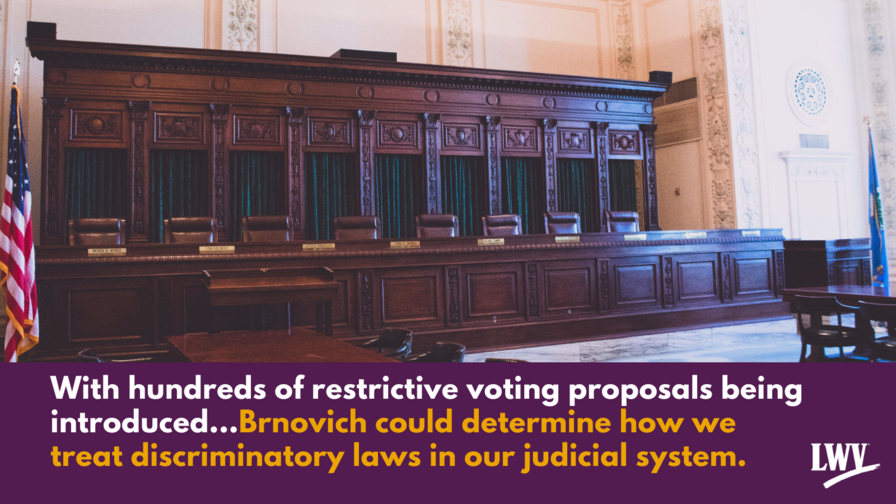 Brnovich v. DNC and the Threat of Discriminatory Voting Laws

The Voting Rights Act (VRA) was passed in 1965 during the height of the Civil Rights Movement. It was designed to prevent states—particularly Southern states with a history of discrimination—from passing laws that either made it harder for Black Americans to vote or that made Black votes less impactful. It was a hugely consequential piece of legislation: data shows that the difference between Black and white voter registration in former Confederate states was almost 30 points in 1960, and by 1970 it had narrowed to single digits.

Brnovich v. DNC is a challenge under the VRA to two voting laws in Arizona: a law banning non-fraudulent ballot collection, and a law tossing out votes if a voter goes to the wrong precinct to cast their ballot. The plaintiffs in Brnovich argue that these laws violate VRA Section 2 (see below) by making its voting system unequal. The Supreme Court heard oral arguments in early March, and a ruling is expected by June.

While the Supreme Court has ruled in many cases involving the VRA, it has never directly spoken to the part at issue in Brnovich v. DNC: the “vote denial” portion of Section 2. In 2021, Section 2 is more important than ever. In the aftermath of the 2013 ruling of Shelby County v. Holder, Section 2 is the only tool voting rights advocates can use to fight discriminatory laws. With hundreds of restrictive voting proposals being introduced following the 2020 election, Brnovich could determine how we treat discriminatory laws in our judicial system.

Litigation to protect minority voters under the VRA focuses on two sections of the law, and the two sections function slightly differently:

Until Shelby County, Section 2 and Section 5 were both powerful tools that the federal government could use to stop states from passing laws that made it harder for minority Americans to vote. States that historically discriminated against Black and other minority voters couldn’t make any changes without getting clearance from the federal government. And even in the states that were not “covered” under Section 5, individual voters and groups could bring lawsuits challenging voting laws that impacted minorities.

After the Supreme Court struck down the coverage map in Shelby County, Section 2 became …the only tool left for voting rights advocates to use to challenge discriminatory laws.

After the Supreme Court struck down the coverage map in Shelby County, Section 2 became much more important: it was the only tool left for voting rights advocates to use to challenge discriminatory laws, even in states with a history of discrimination.

Brnovich illustrates this well. Arizona was one of the states included in the Section 5 “coverage map” prior to Shelby County, meaning it needed to get permission from the federal government to change its voting practices. For example, Arizona tried to ban non-fraudulent ballot collection in 2011 and the federal government denied preclearance, citing evidence that the law was intended to discriminate against Hispanic voters. But post-Shelby County, without Section 5 enforcement from the federal government, Arizona was able to pass a very similar law banning ballot collection. That means voters must use Section 2 to bring suit after the law has already passed, as they did in Brnovich.

As mentioned above, the Supreme Court has never heard a case involving the “vote denial” part of Section 2, so it has never decided some important questions about how it applies. The two most important open questions are:

These are the questions the Supreme Court must answer in Brnovich, and given Section 5’s gutting, the answers to these questions will define how successful states’ voter suppression efforts are going forward.

Read more about how the VRA works.

Compounding this issue is the influx of restrictive voting bills passed in 2021 following an election with record turnout. As of February 19, state lawmakers had introduced over 250 bills that restrict voting, concentrated in states that were previously covered by the Section 5 preclearance map, i.e. states with a history of voting discrimination such as Georgia and Arizona. States are justifying the laws by claiming that there was widespread voter fraud in the 2020 election. The problem? According to the Department of Justice, numerous courts, and experts, there was no election fraud at all.

Georgia and Arizona are also notable because they are the two states with historic election results fueled by minority voting. For example, 60% of registered Black voters voted in the 2020 election in Arizona, up from 46% in 2016. Many people speculate that this is why Georgia’s Senate seats went to Democratic candidates despite the state being known as a conservative stronghold. The influx of voter restriction laws, in that context, presents a concerning reality: state legislatures may be passing laws making it harder for minority voters to vote not because of fraud, but because they didn’t like how many minority voters were able to cast a ballot in the last election.

As a result, Supreme Court’s ruling in Brnovich will decide whether voting rights advocates will be able to successfully challenge discriminatory voter suppression laws.

There are two background narratives working together to make Brnovich hugely consequential. States — including many of the states that were covered under Section 5 and have a history of discrimination against Black and other minority voters — are capitalizing on baseless election fraud claims in order to pass hundreds of discriminatory suppression laws. And because of the Supreme Court’s attack on Section 5, Section 2 is the only mechanism left to challenge these laws. As a result, Supreme Court’s ruling in Brnovich will decide whether voting rights advocates will be able to successfully challenge discriminatory voter suppression laws, or whether states will be able to further erode the protections put in place by the Voting Rights Act.

Shelby County may have weakened the VRA’s protections, but we have an opportunity to restore and strengthen them. If passed, the John Lewis Voting Rights Advancement Act (which President Biden voiced his support of in his recent joint address) would provide new criteria for the type of preclearance required by Section 5, as well as procedures for states to prove that preclearance is not necessary. This would restore the government’s ability to review new voting laws in states with a history of voter discrimination.

The John Lewis Voting Rights Advancement Act is expected to be introduced to Congress in the upcoming year. Once it is, let your Representatives know that you support it. The League stands behind this necessary legislation and will continue to provide updates on our fight for voter equality. We will also continue to provide updates on the status of Brnovich, and encourage you to watch this crucial battle closely.

Brnovich v. DNC is a case before the Supreme Court addressing the collection of ballots by third parties and the counting of provisional ballots cast outside of a voter’s designated precinct.

We thank President Biden for calling on Congress to pass the For the People Act and the John Lewis Voting Rights Advancement Act, and we echo that call.

Press Release / April 29, 2021
Six Years Since Shelby Shows There’s More Work to Do. Here’s How You Can Make an Impact.