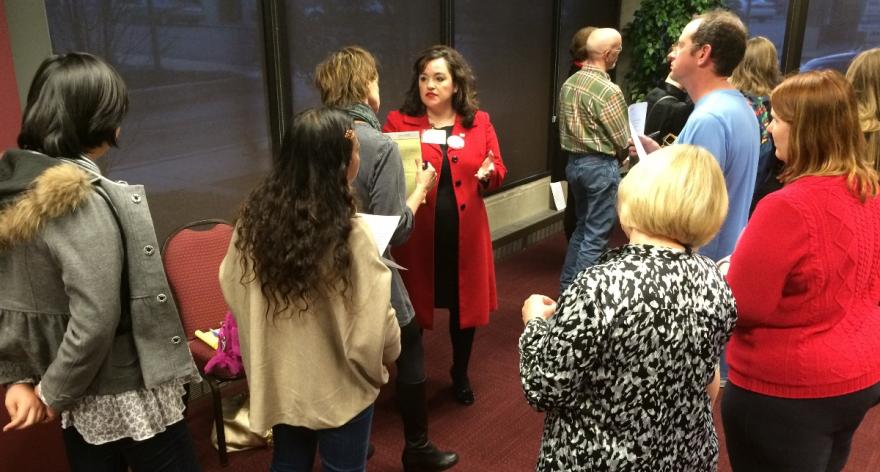 EDITORIAL NOTE: This guest blog post was written by Ann Elwell, voter services chair of the League of Women Voters of Southwest Missouri

OK, let’s admit it: Sometimes the same candidate forums that made the League of Women Voters famous can be a little... predictable, and a bit dry.

Faced with a slate of 10 candidates for city government in the April 7, 2015 election, the League of Women Voters of Southwest Missouri decided to try something new to introduce them to voters. The League dubbed the event “Candi-dating” and based the format on speed dating, a tried and true formula for meeting a large number of people in a relatively short span of time.

As the over 60 attendees arrived for the evening program, each was given a number and assigned to a small group. Following brief opening statements from each candidate, the “dating” began. Positioned around the meeting hall, candidates met with their first small group, based on the assigned numbers. With no need to repeat their background or vision statements, it was the voters’ turn to find out more about each candidate. The League and a partnering organization, the Neighborhood Advisory Council, provided “prompting” questions in case conversation needed to be jump started, but voters came prepared with questions of their own, too.

Five minutes of rapid, back-and-forth conversation and then it was time for each group to move to the next candidate. League members served as “shepherds” for each group to make sure no single attendee monopolized the time and to keep groups moving along at the end of each round. In about an hour, the voters had met—and questioned—the entire slate of candidates.

After completion of the event, both attendees and candidates were smiling. Attendees liked the face-to-face interaction and the chance to be heard on issues they considered important. Candidates were relieved not to have to sit through the usual questions-and-answers-posed-by-a-moderator format. Everyone enjoyed the fast pace.

Since the first date went so well, we expect a good report from the second date: Election Day.

The co-presidents of LWV Cuyahoga Area (OH) guest blog about their voter service work and their high school registration project in particular.

"The League of Women Voters of Eastern Carver County and the SouthWest Metro Chamber of Commerce are offering candidate forums and resources this election season. The League has launched www.VOTE411.org, with candidate information, voter registration tools, polling place locations and other Election Day information."

News Clips
For the Record

“The League of Women Voters of Collier County [FL] should be congratulated for bringing candidate viewpoints to us. I watched live, both nights, their candidate forums. For most of us, it is the only chance we get to see and hear what candidates have to say.”