Celebrating the 100th Anniversary of the Women’s Suffrage March 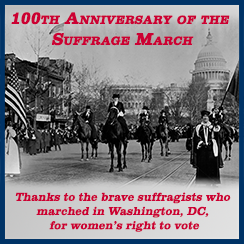 On March 3, 1913, 5,000 suffragists from across the country gathered in Washington, DC, to demand the right to vote. The elaborate parade, which marched from the U.S. Capitol to the Treasury Building, included nurses, college students, academics, and clergywomen united in the struggle for women’s suffrage.

Throughout the three-hour parade down Pennsylvania Avenue, marchers faced strong opposition from anti-suffragists among the crowds. Insults and lit cigarette butts were hurled at them, and marchers were tripped, groped and beaten. The violence was so intense that army troops were called in to restore order, and 100 marchers were hospitalized.

Yet even amid the abuse and opposition, many suffragists completed the parade route, and their voices were heard. Reverend Anna Howard Shaw, president of the National American Woman Suffrage Association (NAWSA), underscored the women’s perseverance: “I have never seen greater dignity under trying conditions; greater coolness under insult and oppression than was displayed by the marchers for suffrage today.”

In the end, the opposition faced by the marchers only helped their cause. Their mistreatment, including their lack of protection by police, led to a public outcry that strengthened press coverage of the women’s suffrage movement for weeks to come. Ultimately, the Washington march succeeded in reinvigorating the suffrage movement, which had stalled at a national level. It would be a number of years until the 19th amendment gave women the right to vote, but the 1913 suffrage parade helped pave the way for renewed attention to fight for women’s suffrage.

Want to help honor the thousands of women who fought for the vote? The Delta Sigma Theta Sorority, joined by a number of women’s organizations including the League of Women Voters, has organized a parade to commemorate the 100th anniversary of the 1913 Woman Suffrage Parade in Washington, DC.  The parade kicks off this Sunday March 3, 2013, at 9:00am ET by the U.S. Capitol.

“We are pleased that the images of several of the inspirational leaders who fought to secure the right to vote for women will grace our nation's currency," said President MacNamara.