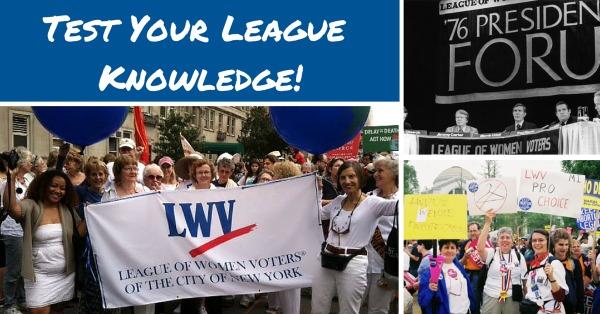 The League is proud to celebrate Women’s History Month and to celebrate a little of our own history, 95 years after our founding. How well do you know the League’s impact on Americans’ lives? Test your knowledge and learn more about just a few of the League’s great accomplishments over the past 95 years!

The League was founded by suffragist Carrie Chapman Catt in 1920 - just six months prior to the passage of the 19th Amendment, which secured women the right to vote. League history is women’s history. Since then, the League has been critical in Making Democracy Work® across a range of issues not just for women, but for all Americans.

Take our quiz and learn more about the ways the League has improved our country.

Today, the League empowers people every day to tackle the most important issues facing our communities and country to improve government at every level. From registering thousands of new voters each and every year to providing voters with the elections information they need through our online elections resource – VOTE411.org to advocating for needed reforms to make our elections fair, free and accessible to all eligible citizens, the League will help keep the power of our democracy in the hands of the people for the next 95 years and beyond.

Celebrate Women’s History Month and learn more about how the League has worked for 95 years to improve our country.

From the League’s founder, suffragist Carrie Chapman Catt, former member Eleanor Roosevelt and the thousands of dedicated League supporters working across the country today, we’re proud of the powerful role that both women – and men (since 1974) – play in Making Democracy Work®.

LWV founder Carrie Chapman Catt was featured in TIME's 100 Women of the Year.