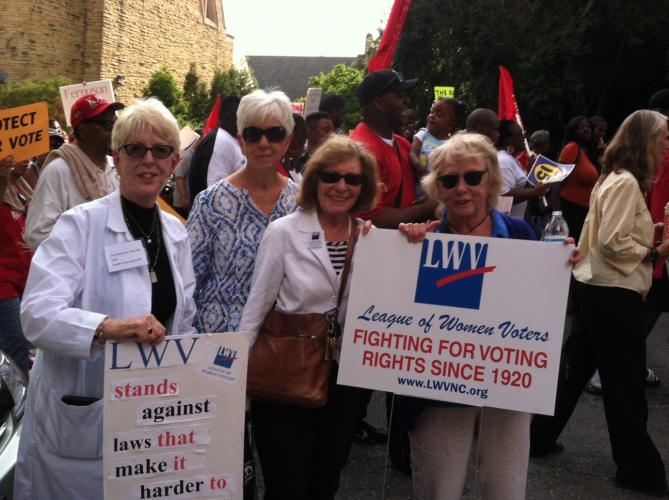 In 2013, just six weeks after the United States Supreme Court gutted a key provision of the Voting Rights Act (VRA) that ensured certain states were not implementing discriminatory voting laws, the North Carolina Governor signed into law an omnibus anti-voter bill. This law cut early voting opportunities by a week, eliminated same-day registration and out of precinct voting, ended the popular pre-registration program for 16 and 17 year olds, and implemented a voter photo ID requirement starting in 2016 in order to vote. The day that law was enacted the League of Women Voters of North Carolina and our coalition partners filed a lawsuit (League of Women Voters of North Carolina et al. v. North Carolina) arguing that the new law unduly burdens the right to vote and discriminates, particularly against African–Americans.

On Monday, arguments began on a consolidated federal lawsuit, including the North Carolina League’s original complaint, which will determine if the legislature knowingly discriminated in crafting and passing this law as well as if the limitations and reductions on registration and early voting violate either the Fourteenth Amendment or the Voting Rights Act. Arguments relating to a state level challenge to the photo ID portion of the law are scheduled to be heard later this summer. Just a few weeks ago, the Governor signed into law an updated photo ID requirement, which sought to “soften” the impact. The League and our coalition partners are currently assessing the impact of these changes on voters.

Prior to the U.S. Supreme Court’s erroneous decision regarding the VRA, North Carolina was required to get approval from the U.S. Department of Justice or a three judge panel in Washington D.C. before implementing any changes in voting or elections laws. Without this protection, voters in North Carolina and other states, like Texas, became vulnerable to discriminatory election laws such as the omnibus anti-voter law in North Carolina. However, due to the various judicial challenges to North Carolina’s law prior to the 2014 election, the U.S. Supreme Court reviewed the law to determine if the new restrictions could be implemented before the 2014 mid-term election. In a dissent to the opinion that allowed many of the restrictions to go ahead, Justice Ruth Bader Ginsberg wrote, “These measures likely would not have survived federal pre-clearance.”

The North Carolina League is actively participating in the federal trial and we look forward to hearing more about the arguments over the next several weeks. The decision in this case could have a major impact on voting rights across the country.