Following the devastating decision of League of Women Voters of North Carolina v. Rucho, the League of Women Voters of the U.S. (LWVUS) saw a new front to join in the fight to defend our democracy. Last month, we officially launched our People Powered Fair MapsTM campaign, uniting the Leagues of all 50 states and DC together for a national organizing effort to end partisan gerrymandering through legislative and constitutional fixes and create district maps that are fair and reflective of the communities they serve. Our state leaders met last week in Dulles, VA, to learn and strategize on how they could organize, empower, and mobilize their state leagues to accomplish our goal.

We opened the training on Thursday morning with a session on campaign planning and organizing that taught attendees how to identify key stakeholders, allies, and adversaries through a tool called Power Mapping. Using the first suffrage movement in 1919 as an example, state leaders learned how to identify what groups hold decision making power, who holds influence, and who can be moved to our side. Learning who holds power in society and what we can do as League members to move that power to voters was a recurring theme in all the sessions, as state leaders continued into breakout sessions on the campaign’s different focus areas and goals.

Together, we have the power to not just change how district maps are drawn, but the power dynamics in our state to make our democracy more reflective and representative of the people it serves.

The first of the breakout sessions began on Thursday afternoon. In the Constitutional Options session, Senior Director of Advocacy & Litigation Celina Stewart introduced attendees to the language that won fairer maps in Pennsylvania and that many state constitutions contain.  In the State and Federal Legislative Fix sessions, attendees planned actions they could take to move their state legislatures to pass legislation that would protect the redistricting process from partisan and racial gerrymandering. Later that afternoon, redistricting leaders attended the "Maximizing Power Across State and Local Leagues" session lead by LWVUS Chief of Staff, Kelly McFarland. In this session, leaders learned how to build the power necessary to increase the League's influence and achieve success. Kelly stressed the importance of communicating, coordinating, and collaborating across Leagues and among partners to achieve the sought-after policy results. Members left excited to begin weaving cross-locality and cross-state coalitions around redistricting.

The convening wrapped up with state leaders gathering to eagerly share new projects and goals they had committed to under this campaign. Everyone was incredibly grateful for the opportunity to connect with one another and gain insight into the work being done by other states. Throughout the sessions, our state Leagues had the chance to connect and exchange best practices. 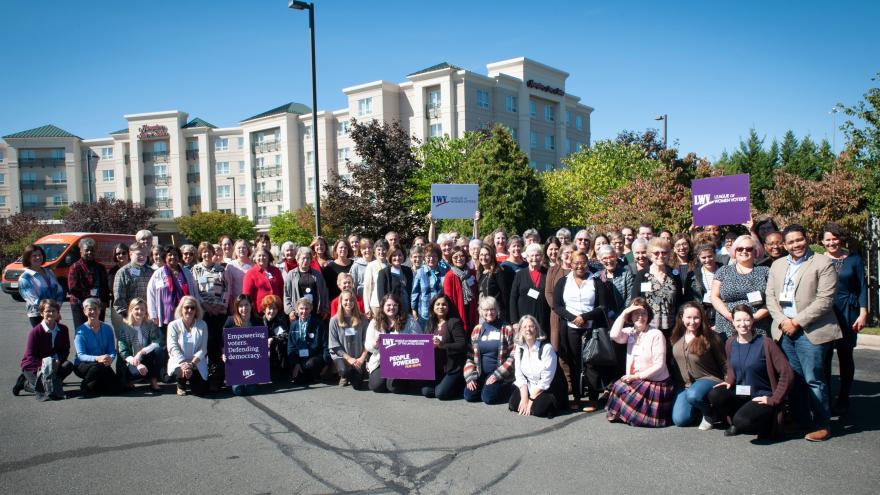 Since the launch of the campaign for People Powered Fair Maps, Leagues across the country have engaged in litigation for fair redistricting practices.  Here's where we've been fighting.

According to a USC study, Arkansas is the 8th most gerrymandered state, in regards to their state legislative districts. Here's how we're working toward fair maps in the state.