Demystifying The Rules: The For the People Act in Committee 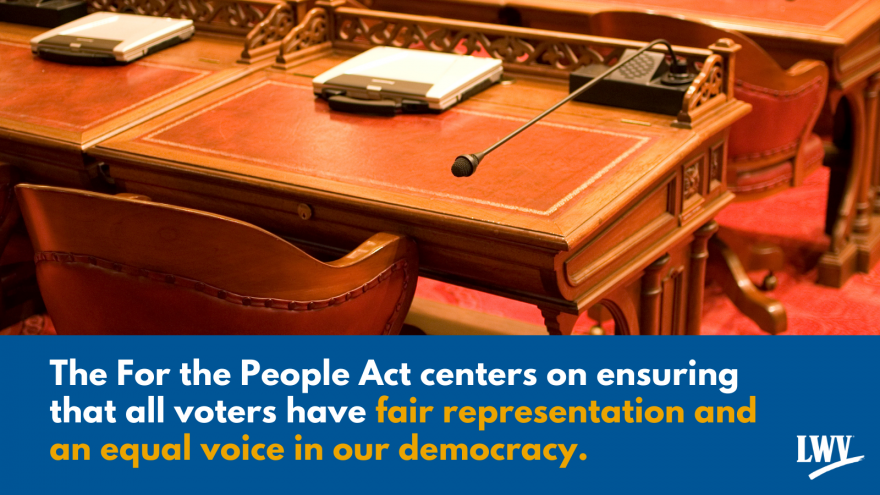 As an organization, the League of Women Voters is dedicated to empowering voters and defending democracy. The For the People Act, S1, is a bill that does the same. We are incredibly proud to support legislation that is in line with our mission and values, and our League leaders, coalition partners, and allies have been working tirelessly on its passage.

Since its initial introduction in the 116th Congress, the For the People Act has become highly visible and popular. It even received a mention from President Biden in his recent joint address to Congress where he urged his colleagues to get the bill on his desk.

On March 24th, S1 received an historic hearing in the Senate where we heard from local elections officials, state leaders, activists, and policy experts on how the For the People Act would be transformative for our democracy.

S1 is now in the Senate Rules committee chaired by Senator Klobuchar (D-MN) and ranking member Senator Blunt (R-MO). The Senate Committee on Rules has jurisdiction over federal elections and campaign finance laws in the country.

On May 11, the For the People Act will take another historic step forward by receiving a markup in the committee. A markup is when a committee or legislative body debates, amends, and rewrites legislation. It will be the first time in the bill’s history that it will receive a committee markup in the Senate. The markup will be very comprehensive and may last longer than one day.

As we celebrate this amazing progress and work towards passage, it is important to understand the markup process and potential outcomes. The Rules Committee does not allow anything to pass out of committee if it has a tie vote. As a result of the evenly split 9-9 membership of the committee and anticipated party line vote, S1 will not leave the Rules Committee. However, this does not mean that the For the People Act is doomed. There are alternatives that Senate leadership can use to bring the bill to the floor for a vote:

It would be a shame for S1 not to come out of the committee on its own. The For the People Act has wide, bipartisan support across the country. Members of the committee should not stand in the way of popular reforms.

Passage of the For the People Act means an end to dark money influence on our elections. It means expanding access to the ballot for millions of Americans. S1 focuses on ensuring that all voters have fair representation and an equal voice in our democracy. These are ideals that all Americans, and the people who represent them, should stand for.

While we can’t say for certain what direction Senate leadership will take to move S1 out of committee, we also cannot let that uncertainty demoralize us. The For the People Act is a once in a generation democracy reform bill, and our fight for its final passage stays the same. The League of Women Voters is ready to see this bill come to the floor for a vote and to work with the Senate to deliver it to President Biden’s desk.

You can make a difference in the fight to get this bill passed; tell your Senator that you support the For the People Act today.

Blog
The Formerly-Convicted Should Get to Vote. Here’s How the Senate Can Make it Happen.

Formerly-convicted individuals get counted in the census, hold jobs, raise families, and contribute to their communities -- why shouldn’t they have a voice in their representative government?