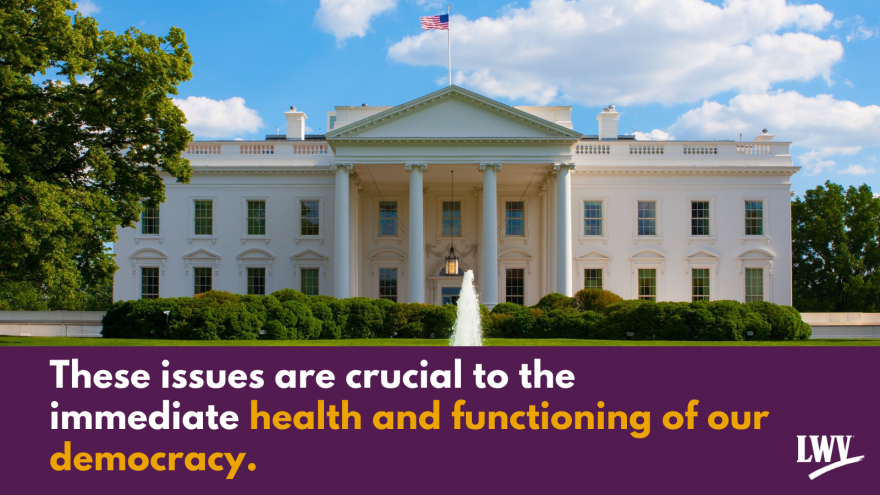 This Wednesday, April 28, President Biden will make his first speech before Congress. His address will take place near the critical 100-day mark of his presidency, one that has been largely shaped by the COVID-19 pandemic and its impact on the global economy.

Yet COVID-19 has hardly been the only thing on our minds. In the past five months, the nation has seen hardship in the form of voter suppression, mass shootings, police brutality, transphobic legislation, and widespread attacks on the Asian American and Pacific Islander community.

To say that President Biden has a great deal to address would be an understatement. Below, we’ve compiled a list of topics that we consider crucial in steering the US towards a path of recovery, both from the pandemic and from other forms of turmoil.

In response to the unprecedented levels of voter turnout in the 2020 election and their historic impact on outcomes in states like Georgia, politicians in 47 states have proposed more than 360 restrictive voting bills.

It's necessary to the welfare of our democracy that we counter these bills with legislation that expands voting rights rather than limiting them.

It's necessary to the welfare of our democracy that we counter these bills with legislation that expands voting rights rather than limiting them. Two central proposals are the For the People Act (S1), currently before the Senate, and the John Lewis Voting Rights Advancement Act (HR4), which is awaiting a vote at the House.

Meanwhile, the John Lewis Voting Rights Advancement Act restores the original Voting Rights Act and ensures that every voter—regardless of where they live, what they look like, or what language they speak—has equal access to the ballot box and is protected from unfair laws and practices that make it more difficult to vote.

Both are necessary to wellbeing of our democracy, and we hope President Biden uses his address as an opportunity to promote their passage.

With the nation still reeling from over 140 shootings in 2021 alone, President Biden must speak on the epidemic of gun violence. It is far past time for decisive action to protect the American people and allow them to live their lives without fear of attack.

Per the League’s March 25 statement following the shooting in Boulder, CO, “it is time for Congress to adopt legislation that will mandate universal background checks, ban assault weapons, place limits on high-capacity ammunition magazines, and fund research and reporting on gun violence in America. Curbing gun violence is a critical matter of public safety, public health, and public confidence.”

From the alarming rise in hate crimes against the Asian American and Pacific Islander community to the continued menace of police brutality against Black and brown Americans, the impact of white supremacy cannot be understated.

We hope that President Biden will take the recent conviction of George Floyd’s murderer not as a sign that this issue has been resolved, but as inspiration to move even further to address the racism inherent in institutions that were founded under slavery.

In particular, it is important that he speak to the issue of police brutality and identify clear measures for reforming our racist justice system. He may do so by referencing the George Floyd Justice in Policing Act of 2021, which aims to increase police accountability. This House voted to pass the Act in early March, and it now awaits a Senate vote.

Every ten years, states redraw their legislative and congressional district lines, determining where and how different communities are represented. 2021 is one such year.

The way our maps are drawn impacts our access to healthcare, clean water, and hundreds of other necessities. Yet the process is often threatened by gerrymandering.

The way our maps are drawn impacts our access to healthcare, clean water, and hundreds of other necessities. Yet the process is often threatened by gerrymandering, i.e. the drawing of maps to benefit a politician rather than a community.

During this once-in-a-decade process, it’s important that our president guide us towards the fair and accurate creation of maps and away from the special interests of politicians.

On April 29th, the League is hosting our People Powered Day of Action to empower Americans to get involved in their local redistricting process. Sign up for one of our many nationwide events to ensure that your voice is heard.

At the beginning of his tenure, President Biden raised climate change as one of his top four priorities. The League, which has fervently advocated for a coordinated government response to climate change for decades, shares his sense of immediacy.

Recently, we joined Our Children’s Trust and more than 70 other organizations in supporting the Children’s Fundamental Climate Rights and Recovery Resolution. The resolution recognizes our current human-caused climate crisis and the hazards it poses to our children’s health and futures. It demands that the government develop a science-based recovery plan.

We hope Biden uses this opportunity to propose ambitious, science-based actions to reduce domestic emissions, protect natural resources, and support the communities most impacted by natural disasters and industrial transitions. These communities are frequently comprised of marginalized Americans, including people of color, the elderly, and individuals with limited financial mobility.

President Biden certainly has a great deal to speak to during his address, but we believe these issues are crucial to the immediate health and functioning of our democracy. We’ll be listening closely to hear how effectively he does the job we’ve elected him to do: lead.

At the League, it is our hope that we will be able to work in step with the current administration to make progress on LWV priorities aimed at working toward a better democracy, together.

The League of Women Voters is committed to the fight for fair maps in 2021 and beyond. We are throwing down on April 29, 2021 to shine a light on redistricting and demand fair maps through a People Powered Day of Action.