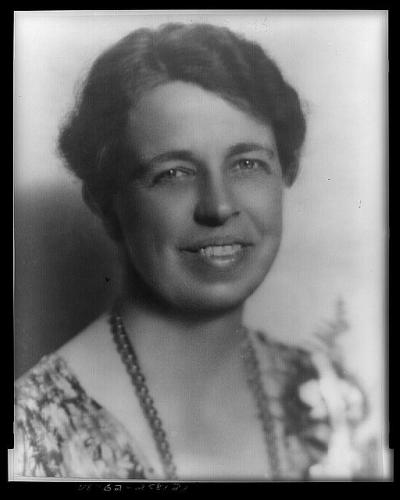 Eleanor Roosevelt (1884 -1962) is commonly hailed as one of the most influential American women of the 20th century. In addition to serving as the First Lady of the United States from 1933-1945, she was a newspaper columnist, an author, a diplomat and a seasoned politician. She was also a formative leader of the League of Women Voters.

Deeply involved in social justice work, Eleanor Roosevelt believed strongly that women deserved a place at the table when it came to politics. Prior to her husband’s presidency, she worked with and helped lead a number of women’s groups, including the International Congress of Working Women, the Woman's Trade Union League and the Women's International League of Peace and Freedom. After the League of Women Voters was founded in 1920 – the same year that Franklin D. Roosevelt ran for Vice President – she helped establish its policy agenda. As the League’s Vice President of Legislative Affairs, she lobbied for reforms in Congress and worked tirelessly to strengthen women’s role in politics, helping mobilize women voters through the League’s nonpartisan training and lobbying work. “I’ve always found that the best workers in a political party frequently are graduates of the League of Women Voters,” she wrote in 1953. “Members learn how to find out what they really want to know on a wide variety of subjects. The League…trains good citizens who have a sense of responsibility about what goes on in their locality, in their state and in their nation.” Even after she resigned as League Vice President in 1924, she remained an active League member and continued to promote the League’s platforms and ideals, including regularly writing for the League of Women Voters of New York’s newsletter.

Eleanor Roosevelt’s work to empower women’s participation as voters and political leaders only strengthened after her husband assumed the presidency in 1933. She consistently campaigned for the Roosevelt administration to hire women for executive level appointments, supported anti-lynching campaigns and fought for fair housing for minorities. Throughout these efforts, she held press conferences to inform women voters, including urging them to speak their minds and engage on policy issues.

After she left the White House in 1945, Eleanor Roosevelt continued to promote women's equality through her work not only with the League, but also with groups like the National Association for the Advancement of Colored People (NAACP) and the National Council of Negro Women (NCNW). As chairwoman of the Human Rights Commission of the United Nations (now the Human Rights Council), she strengthened the League’s involvement with the UN and its role as player and partner in global democracy. In acknowledgement of her invaluable work around women’s and human rights, she was nominated for the Nobel Peace Prize by President Kennedy, among others. Though she was never awarded the prize, she received countless other honors.

Decades after her death, she continues to epitomize the powerful role that women, including League members, have played – and continue to play – in furthering equality, strengthening our government and Making Democracy Work®.