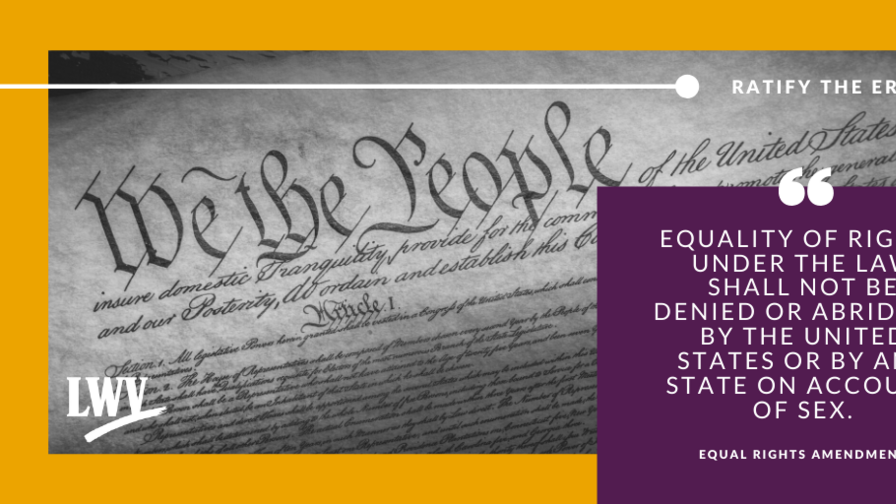 On January 27, 2020, Virginia became the 38th state to ratify the Equal Rights Amendment. The League of Women Voters has supported and pushed for ratification of the ERA since it was first passed by Congress in 1972. Leagues across the country have worked to engage lawmakers and organize at the grassroots level to ensure equal rights for all, regardless of sex, is enshrined in the US Constitution. Now that the amendment has passed the 38-state threshold for ratification, several questions have arisen about its path to final enshrinement.

What is the process for ratifying a constitutional amendment?

The National Archives and Records Administration (NARA) oversees the constitutional amendment process. Once a joint resolution is passed by Congress, it is sent to NARA Office of the Federal Registry (OFR) for processing and publication. Then, it goes to the states for ratification, where it is sent through the state ratification process. Once a state ratifies the amendment, it sends a certified copy of the action back to OFR, who retains the documents until an amendment passes or fails. All final documents are sent to NARA for preservation.

What happens now that Virginia has ratified the ERA?

I’ve heard some states have rescinded their approval of the ERA. What does that mean?

I’ve heard there was a deadline for ratification set when the ERA passed. What does that mean?

When the ERA was first passed, Congress inserted a timeline for ratification in the preamble of the amendment for seven years. This was later extended three more years. Ratification of the ERA was three states short after the second deadline passed in 1982. The deadline for ratification leaves some ambiguity around whether the amendment can be added to the constitution, but Congress can play a role in removing that ambiguity.

Is there legislation in Congress to remove the deadline?

Legislation introduced in both chambers of Congress will remove the deadline for ratification from the Equal Rights Amendment. H.J. Res. 79 and S.J. Res. 6 are the two pieces of legislation that have been introduced to remove the ratification deadline. Both pieces of legislation have been referred to the Judiciary committees. H.J. Res. 79 was passed out of the House Judiciary Committee on November 13, 2019, and is scheduled to be heard on the floor of the U.S. House the week of February 10, 2020. The Senate resolution has bipartisan support but has not had a hearing.

What about court challenges to ratification or the removal of the deadline?

Several legal cases have emerged in the South to support invalidating the ratification of the Equal Rights Amendment. It is important to note that the states bringing these cases are not ratifying states, and it is questionable whether they have standing to do so.

What can I do to help support efforts to move this legislation forward?

Check out our action alert, where you can contact your Representatives today and ask them to vote Yes for H.J. Res. 79 and remove the ERA’s ratification deadline so that the ERA becomes law.

This past Wednesday, the U.S. House Judiciary Committee ruled 21-11 to remove the ERA's ratification deadline and now the resolution moves to the House floor for a vote.