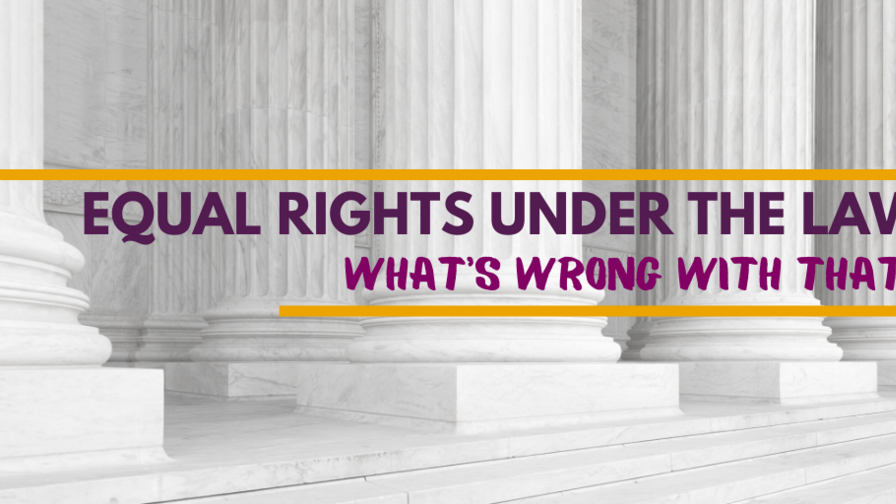 Equal Rights Under the Law, What’s Wrong with That?

The Equal Rights Amendment (ERA) has fueled heavy debates for decades after its introduction in 1923. The radical idea of total gender equality under the Constitution belonged to the more militant feminists of the 1920s. The opponents of the ERA believed that such equality would hurt women because it would tear down protective laws—especially in the workplace.

While FDR’s New Deal enacted laws in the 1930s that established fair labor standards and regulated wages for all, the worry that the ERA would tear down laws meant to protect women still influenced the liberal-labor coalition and other organizations that were working toward equality. With the passage of Title VII of the Civil Rights Act of 1964 came many cases of sex discrimination and complaints that revealed protective labor laws to be tools used to limit employment opportunities for women. Thereafter, in 1972, Congress finally passed the ERA stating that “Equality of rights under the law shall not be denied or abridged by the United States or by any State on account of sex.” Yet, almost 50 years after its passage, it has still not been added to the Constitution.

Opponents of the ERA echo justifications from the past that equality of the sexes would force women to be drafted, eradicate restrictions on abortion, and even create genderless bathrooms. The fear surrounding this amendment has prolonged its addition long enough. With the ERA’s recent ratification, it is now very important to understand why the ERA is necessary and look to states that have already passed such amendments in their own constitutions for guidance on this important subject.

Why is the ERA necessary when we already have the 14th Amendment?

The late Justice Ginsburg acknowledged the failure of the United States to provide that “equal citizenship stature of men and women is a fundamental human right.” She explained, “every Constitution in the world written since the year 1950, even Afghanistan, has the equivalent of an equal rights amendment, and we don’t...”

So, why is this necessary? Opposing arguments against the ERA highlight the 14th Amendment and argue that women are already guaranteed equal rights under the law. However, the 14th Amendment was passed in 1868 to give former male slaves equal protection and voting rights.  This was not meant to provide the same for former slaves that were women or to women in general. This became clear when Myra Bradwell, a white American publisher, tried to apply it in her case a few years after its passage. Although Bradwell graduated from law school with honors and passed the bar in Illinois, she could not practice law because she was considered legally “disabled” because she was a married woman. The Illinois Supreme Court determined she had no “legal existence” separate from that of her husband. The United States Supreme Court found that the 14th Amendment did not require states to open the legal profession to women. One Supreme Court Justice noted that “the paramount destiny and mission of women are to fulfill the noble and benign offices of wife and mother.”

While the original intent of the 14th Amendment was clearly not to prohibit discrimination on the basis of gender, it is true that it has since been applied to these cases. Ultimately, in 1976 the Supreme Court determined that, pursuant to the 14th Amendment, men and women could only be treated differently under the law if it served an “important governmental objective.” This vague standard has been applied inconsistently and protection has varied with the views of each judge. For example, in 2010, Supreme Court Justice Antonin Scalia publicly announced that the 14th Amendment did not prohibit sexual discrimination under the law.  Sadly, the 14th Amendment has left women with "a dull sword, [and] a small shield.” The addition of the ERA to the Constitution would commit the United States to increasing equality among all persons regardless of gender identification.

What can we learn from state-level Equal Rights Amendments?

To clarify, the ERA would apply to the government and not private actors. This means that the effects of the ERA are not immediately drastic, and its passage will not necessarily change any case law regarding violence against women. This can be seen by looking at results from half of the states that have passed state-level equal rights amendments. What the state-level ERAs have done is increase the likelihood that a court will use a heightened form of scrutiny in cases involving sex discrimination. For example, when a law is passed by the federal or local government that violates a right guaranteed by the United States Constitution, the court that reviews the law applies a standard of scrutiny that is usually determined by the status of the right in question. If the law violates a fundamental right in the text of the Constitution, such as free speech, the court applies the highest form of scrutiny to decide if the law is unconstitutional. In the states that have their own ERAs, the highest form of scrutiny is more likely to be used when reviewing cases involving sexual discrimination.

The changes that the ERA would make to our legal system and our society are more indirect. The fear that the ERA would overturn all restrictions on abortion, create genderless bathrooms, and remove all laws protecting women is not supported by evidence of similar clauses in state constitutions. While there is no way to be sure what a federal constitutional equal rights guarantee would mean, it is not possible to deny the fact that many states have tried it out, and they are doing just fine!

For example, in 1972 Texas amended its State Constitution to include, “Equality under the law shall not be denied or abridged because of sex, race, color, creed, or national origin.” Despite this language, the state still has many restrictions on abortion. Notably, during the current Covid-19 pandemic, a complete ban on abortions created a lot of controversy in Texas. In contrast, New York has yet to amend its Constitution to include prohibition of sex discrimination, but it has been hailed by pro-choice activists and condemned by pro-life activists as one of the most aggressive abortion rights states in the country. These examples show that putting the sexes on equal footing under the law would not abolish all abortion restrictions. And to be clear, this is not the purpose of the ERA.

What about women being drafted or genderless bathrooms?

As mentioned above, another concern surrounding the ERA is that in case the US issues a draft, or mandatory military contribution, women would be forced to enlist. The reality, however, is that Congress already can draft women. The Constitution gives Congress the power to raise armies without any indication as to age or gender. It should be noted that women have been involved in every war the United States has ever fought serving in various capacities. If the ERA did in fact have an influence on whether Congress drafts women into the military, the United States would not be the first to do so. Israel has been drafting both men and women into military service by law since 1948. The protection of our country should not be only a man’s job, and it isn’t.

Vocal opponents of the ERA have also warned the public that equality under the law will lead to drastic unintended consequences such as genderless public restrooms. The purpose of the ERA is to make sure that people cannot be fired, denied housing, or denied public services based on gender or sexual orientation. While it's not meant to abolish gender-segregated bathrooms, it is worth mentioning that states have knocked down rigid gender restrictions of restrooms without even having state-level equal rights amendments. In Nevada, for instance, prohibitions restricting bathroom access for transgender employees was found in the federal court to be discriminatory under Title VII of the Civil Rights Act. If unrestricted bathroom access is going to happen, it will not be because of the ERA.

It is important to recognize that inequality hurts everyone. This amendment is not only for women, but regardless of gender identity. It is a promise that our government will not pass laws or take any official action that discriminates against its people on the basis of sex.  This amendment is not meant to take away anyone’s rights or voice, but it is meant to clarify that the United States will provide equal protection under the law regardless of sexual identification. As with all amendments, only time can tell us what the ERA will do, but the states have provided a lot of clues as to what we can expect. The ERA is not likely to radically change our government overnight, but it will take us a step in the right direction by providing a tool to hold state actors to the constitutional guarantee of equal protection. As Justice Ginsburg acknowledged, “...even if the argument is that it is largely symbolic, it is a very important symbol."

Blog / November 4, 2020
FY20 Litigation Wrap-Up: A Comprehensive Review of Cases Leagues Are Engaged in Across the Country
Article / July 29, 2020