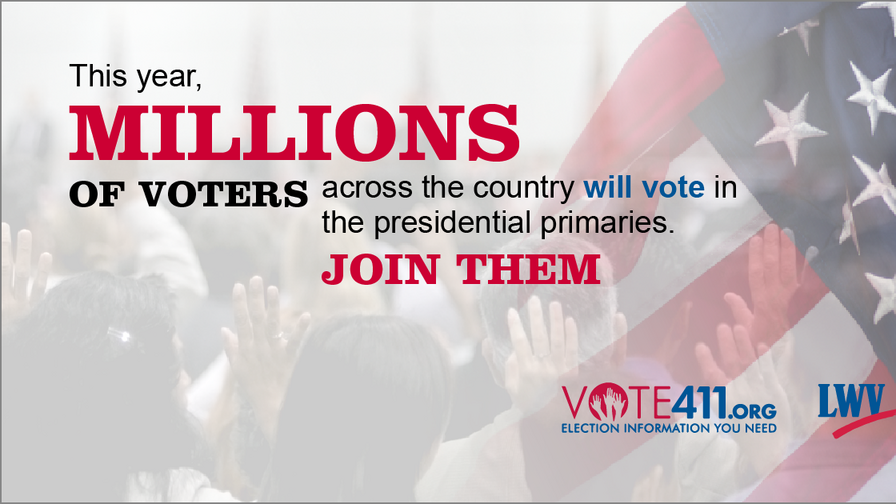 Everything You Need to Know About the Presidential Primaries

This year, millions of voters across the country will vote in the presidential primaries, which begin in just a few weeks. Primary elections and caucuses are a key part of the process to select the next President and provide a crucial opportunity for voters to take control and influence the process by selecting their top candidate to represent a political party in the general election.

Unfortunately, fewer voters tend to turnout for primary elections and caucuses despite the important impact they have on who ultimately wins the race for the White House. Therefore, any increase in turnout can have a significant impact – remind your friends and family to register to vote, so that they can participate in the upcoming presidential primaries. Deadlines to participate in many states’ primaries are approaching soon. To find out more about your state’s primary, visit www.VOTE411.org.

The rules about the primaries, including when they are held and who can participate in them, vary widely by state. But, here’s a quick look to help answer your questions about this pivotal part of our voting system.

How Do Primaries and Caucuses Work? Who Can Participate?
Rules on which voters can participate in primaries and caucuses vary greatly by state. Generally speaking, individuals designate the political party whose primary or caucus they will vote in when they register to vote or update their voter registration, but some states let you make this choice on Election Day. Overall, states generally hold one of three main types of primaries or a nominating caucus.

Open Primaries: Voters can cast a vote in a primary, regardless of his or her political affiliation. This means that as long as you are registered to vote, you may choose which party’s primary you want to participate in when you get your ballot.

Closed Primaries: Only voters who are registered members of a political party prior to the primary may participate in choosing that party’s candidates.

Semi-closed or Hybrid Primary: Voters who have not previously chosen a political party have the option to choose which party’s primary to vote in, while voters registered with a party may only vote in that party's primary. This system represents a middle ground in that independent or unaffiliated voters can still participate, but voters cannot vote outside of their designated party.

Nominating Caucus: A small group of party leaders or a broader group of voters choose the party’s nominee. In some states, voters from any party can participate in any party’s caucus. Unlike a primary election, nominating caucuses are run by the party itself, not the state or local government. Over 10 states, including Iowa, Nevada and Maine, use the caucus process.

What are Delegates?
In the presidential primaries, voters actually select delegates who have committed to represent a particular candidate at the party’s national convention later this summer. Voters may see the delegates name alongside their chosen candidate when in the voting booth. The job of delegates is to confirm voters’ choice on the floor of the party’s national convention. Most states’ primaries and caucuses are binding, meaning that the results legally bind some or all of the delegates to vote for a particular candidate unless the candidate releases their delegates, for example if they drop out of the race. How states disseminate their delegates varies with some being proportional to the election results while others are winner-takes-all.

When Is My State’s Primary or Caucus?
Primary elections can be held at any time throughout the year, but most presidential primaries are held between February and June. The most influential primary day will likely be Super Tuesday, March 1, 2016, when the most states simultaneously hold their primaries and caucuses.

Simply enter your address at VOTE411.org to find everything you need to know about your state’s upcoming elections, including primary or caucus date as well as deadlines for voter registration, early and absentee voting opportunities, voting rules and more.

In addition to debates and forums, voters can learn about candidates through VOTE411.org, including upcoming events and other information provided directly from the candidates regarding where they stand on a variety of public policy issues.

What Else Do I Need To Know?
As more states vote, the number of candidates actively campaigning usually reduces as voters’ preferences become clear, though candidates’ names may remain on ballots after they have withdrawn from the race. Additionally, not all candidates will be on the ballot in every state. VOTE411.org can help voters learn which candidates to expect on their ballot.

Whether at the local, state or national level, voting is the most powerful way to have your voice heard. That’s why it’s crucial that you make sure you’re registered and ready to vote! If you recently changed your name, moved or want to change your party affiliation, please update your voter registration record. Be sure to remind your friends and family members to check or update their registration, too!

To learn more about the electoral process, check out our guide: Electing the President.

Election Day 2016 is coming! Now is the time to remind the people in your life to visit VOTE411.org to register to vote, make sure that their voter registration record is up-to-date and learn about important voting rules and deadlines in their state. With your help, we’re Making Democracy Work®!

The League joined a letter written by the Leadership Conference on Civil and Human Rights with 60 other organizations to urge the Senate to reform the outdated Electoral Count Act of 1887 before the end of the year. The Electoral Count Reform and Presidential Transition Improvement Act, S.4573, represents a significant advance forward to securing and protecting our democracy from future attacks on presidential elections.

Any objection to this process is simply political theater which directly mocks and defies our Constitution.