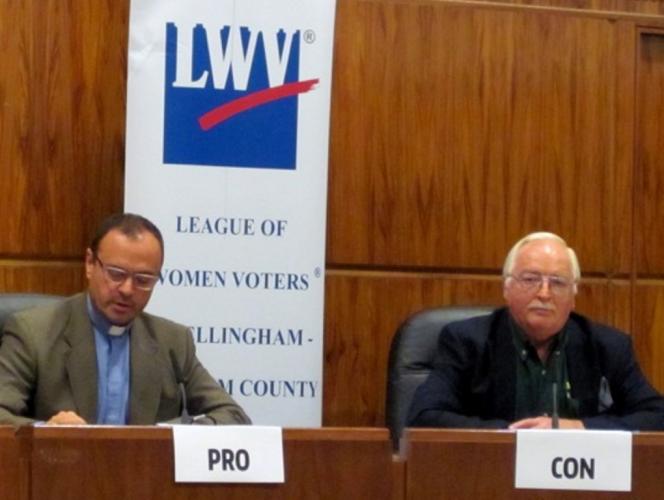 For the League of Women Voters of Washington (LWVWA), it was an Election Day we’ll never forget: over one million Washington voters said YES to backgrounds checks on gun purchases. Initiative 594 (I-594) only needed 50 percent of the vote to pass, but it passed with nearly 60 percent!

With passage, anyone who buys a gun in Washington would be required to go through a background check. This is the same process currently required for the purchase of a gun at a store, but it has not applied to gun shows or internet sales in the past. The campaign was the result of the shock and horror following the school shooting at Sandy Hook, and the disappointment at the failure of Congress to act on gun safety issues after that tragedy. There was a competing ballot initiative to limit background checks failed. The No on 594 campaign was run by the National Rifle Association (NRA).

We were one of the first groups to join the Washington Alliance for Gun Responsibility in early 2013. The Alliance was comprised of many diverse groups from medical and mental health groups to the faith, business, legal and labor communities, parents groups, as well as organizations working on children’s rights, civil rights, anti-poverty efforts, and communities of color. The Washington League of Women Voters assisted the coalition by gathering petition signatures, holding election forums to educate the public on this issue as well as raising money to support the coalition’s work. In advance of the election, we joined over 2,000 other volunteers at phone banks to encourage voters to show up at the polls. And we didn’t back down when a target, riddled with bullet holes, was left at our Seattle office over the summer. We, instead, responded by reaffirming our commitment to the passage of Initiative 594 and called for reasoned civil discussion, not threats and intimidation.

In this precedent setting victory – this marked the first time gun safety supporters have defeated the gun lobby at the ballot box – Washington’s success is being touted as a blueprint for other states. “You proved that the NRA and the gun lobby were not invincible. You showed reformers across the nation that they can fight – and win – commonsense reforms to protect their families and help reduce gun violence at the ballot box,” said Zach Silk, I-594’s campaign manager, to supporters and activists who worked to pass this initiative. “The League is thrilled with the outcome – safer communities because of expanded background checks. We are also excited to be part of such a broad coalition. The relationships we formed with like-minded groups will go beyond this campaign. We believe we have strengthened the League’s role and reach in Washington,” stated Kim Abel, president of the Washington League of Women Voters. We expect the approved background checks to go into place next month.

And so we say thank you! Thank you to the many League supporters and voters who helped pass this important initiative, making our state a safer place. We’re not stopping here either. The organizations behind I-594, are already working on an aggressive legislative agenda for next session to ensure Washington remains a leader on reducing gun violence. In the meantime, we are inspired to watch other states work on gun safety issues, including similar ballot initiatives to expand background checks. We hope our victory will help gun safety advocates in other states see a path to victory.

In the aftermath of the tragic mass shootings in El Paso and Dayton, LWV joins our partner organizations in condemning white supremacy and demanding real reform to combat hate.

The League sent a letter to the U.S. Senate outlining the policies needed to curb gun violence.

The Fix NICS Act, legislation that will improve and enforce reporting to the National Instant Criminal Background Check System (NICS).