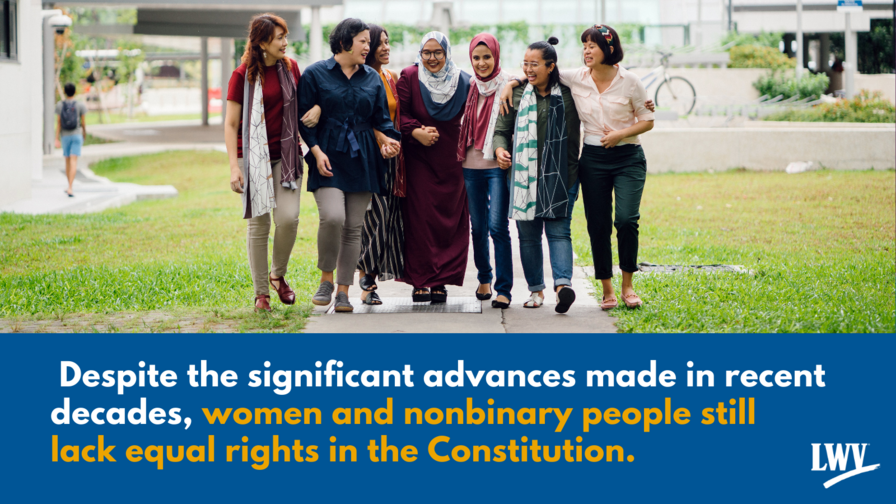 The Fight for Sex-Based Equality Continues

On the 101st anniversary of the US House voting to ratify the 19th amendment, the fight for equality is not over. Despite the significant legal and legislative advances made in recent decades, women and nonbinary people still lack equal rights in the Constitution. Further, they continue to face systemic discrimination in the ongoing fights against unequal pay, workplace harassment, pregnancy discrimination, domestic violence, and limited access to comprehensive healthcare.

It is not enough to treat the symptoms; we must address the root cause of inequality by amending the Constitution and finally adding the Equal Rights Amendment (ERA).

The League has supported the ERA since 1972, when the national Convention overwhelmingly approved support of “equal rights for all regardless of sex” as a necessary extension of the League’s support for equal opportunity. With this decisive action, the League came full circle in giving priority support once again to equal rights for all people.

However, when it passed the ERA in 1972, Congress attached a deadline for ratification to the amendment. Because that timeline has passed, ambiguity exists about whether the amendment can now be certified as normal. The League sides with constitutional scholars who believe that Congress has a clearly established basis for their authority to extend or remove the time limit from the resolving clause of the Equal Rights Amendment.

The idea of time limits on constitutional amendments is a modern congressional addition to the amendment ratification process. Prior to the twentieth century, there was no discussion of imposing a time constraint on the states’ consideration of a proposed amendment. Congress derives its power to set a time limit from its authority to designate a mode of ratification.

In 2020, Virginia became the final state needed to ratify the ERA. Legislation to remove the timeline, S.J. Res.1 and H.J. Res. 17, has bipartisan support and has already passed the U.S. House in the 117th Congress. Removing the timeline would ensure that work done by state legislatures to move this important amendment forward is not done in vain.

Removing the arbitrary timeline for ratification of the ERA is vital to ensuring that full constitutional protections are guaranteed for all people. As an organization that defends democracy, the League of Women Voters believes that there cannot be a time limit on establishing equality, and final ratification of the ERA is needed to ensure equal rights for all regardless of sex or gender.

As a country, we are on the cusp of a victory for this long-awaited amendment. Congress must do the work to eliminate the timeline so that when the amendment is fully ratified it can go into effect immediately.

The League has fought for the ratification of the Equal Rights Amendment (ERA) to secure equal rights and we ask Congress to pass HJ Res 17, to remove its ratification deadline.