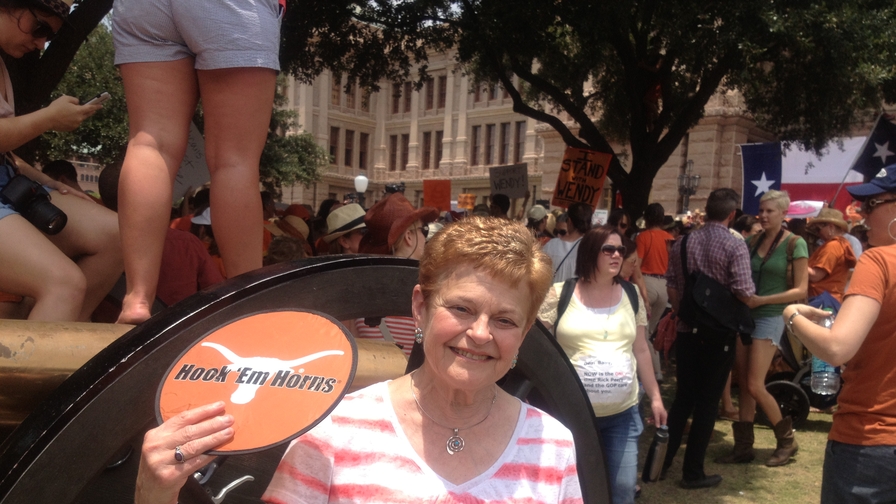 EDITORIAL NOTE: This guest blog post was written by Julie Lowenberg, former president of the League of Women Voters of Texas

The past year has been a roller coaster ride for the League of Women Voters of Texas (LWVTX) and other pro-choice advocates in Texas as our state continues to have the dubious distinction of being on the “cutting edge” of a nationwide effort to restrict women’s access to safe, legal abortions – but, in response to these threats, we are witnessing a growing pro-choice movement.

After the Texas Legislature regular session adjourned last May, LWVTX briefly rejoiced that none of the many bills filed that threatened women’s reproductive health and that LWVTX vigorously opposed had passed. But Governor Rick Perry immediately called a 30 day special session, setting legislation relating to abortion on the agenda. The bills filed that had “legs” were omnibus companion measures that would ban abortion after 20 weeks; require all procedures to be performed in a “mini-hospital” (PDF); force women to make four trips to clinics for drug-induced abortions (PDF); and require all abortion doctors to have admitting privileges at a nearby hospital (PDF).

Hundreds, with estimates as high as 700, including LWVTX, registered to testify against the measures. In addition to submitting testimony, we also activated our supporters to contact their legislators in opposition to these bills. The House committee closed its hearing after 10 hours, with many, including our representative, still waiting to be heard, and approved the bills. Despite the outcome, pro-choice advocates were heartened that, with the special session set to end soon, their testimonies had held up the bills for precious hours that might enable senators to filibuster the legislation when returned to them for final approval.

And sure enough, the filibuster scenario played out: On June 25, with the clock set to run out at midnight, the bill reached the Senate floor. Activists (including a number of LWVTX members), many wearing t-shirts saying “Stand With Texas Women,” began arriving in the Senate gallery, with hundreds more showing up as the day wore on. At 11 AM Senator Wendy Davis began her now legendary filibuster, needing to continue until midnight in order to kill the bill. According to a Davis spokesperson, the Senator was acting as “the voice of those people that were basically cut off from presenting their stories and testimony” at the committee hearing.

As afternoon turned into evening, several senators challenged Davis with specious “points of order” – unfortunately sustained – which meant that the filibuster ended on the third such ruling, shortly after 10 PM. Other pro-choice senators then stepped in to help stall a vote on the bill with procedural questions until 11:45. As the presiding senator was about to start the roll call on a procedural vote before the final vote, Senator Leticia Van de Putte interrupted with a parliamentary inquiry, asking, “When must a female senator raise her voice to be heard by her male colleagues?” At that point, the gallery, filled with pro-choice supporters, erupted in cheers that were echoed by others standing outside the gallery and all around the Capitol building. Amidst the cheering and chaos, the presiding senator was unable to restore order and midnight came and went and the bill died without a vote having taken place.

Though another special session and another round of anti-abortion proposals and tactics loomed, the experience of the first special session was an inspiration and motivation for champions of reproductive health and rights to stay strong. Governor Perry wasted no time in calling a second special session, with abortion front and center on the agenda. With unabated passion, approximately 5000 pro-choice supporters from across Texas, including many LWVTX members, assembled on the Capitol grounds on the session’s first day to bring their message to legislators. The League was again prepared to testify against the bill (PDF).

Regrettably, the same bill that died in the previous session passed the second special session. Senator Davis did not try to reprise her heroic filibuster, but spoke eloquently against the bill, noting the numbers and passions of citizen opponents who showed up again and again at the Capitol during both special sessions, saying, “The fight for the future of Texas is just beginning.”

The bad news is that Texas now has one of the strictest abortion laws in the US – designed to drastically reduce women’s access to safe, legal abortions. Already 12 clinics have shut because their doctors could not get admitting privileges at nearby hospitals. According to the Director of Texas ACLU, 9 million women are now hundreds of miles from a facility that performs abortions, and medication abortions have almost been eliminated statewide. Meanwhile, a lawsuit filed by Planned Parenthood and other abortion providers seeking overturning of the new law as unconstitutional is making its way through the federal court system. This challenge to the law could come before the Supreme Court within the next year.

The silver lining is that the “sleeping giant” – the pro-choice majority – has been awakened and activated in Texas and across the country. As we observe the 41st anniversary of Roe v. Wade on January 22, we reaffirm our dedication to women’s reproductive choice, including the right to a safe, accessible and legal abortion.

LWVUS joins in urging the US House and Senate in support of ending Title 42, which has rendered our southern border and ports of entry virtually closed to asylum seekers and refugees.