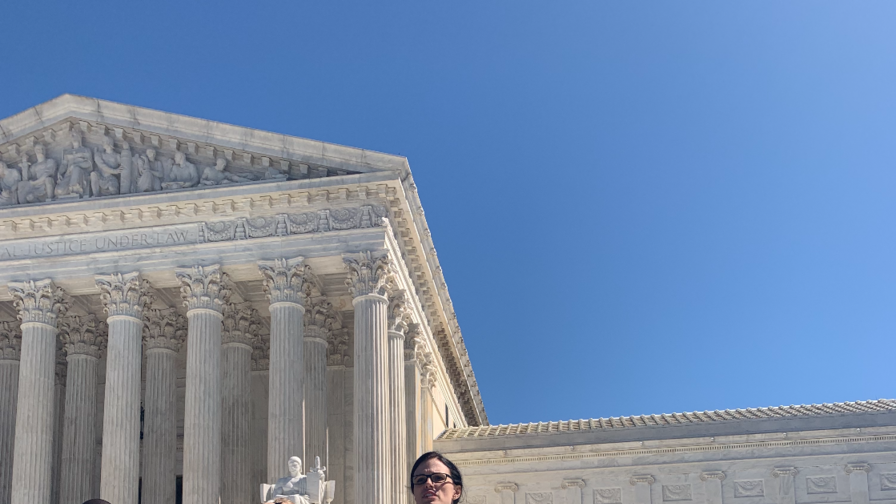 Photo Credit
Allison Riggs, Attorney for LWV of North Carolina, speaks to the press outside the Supreme Court on March 26, 2019
By: Celina Stewart

Inside the Courtroom for Rucho v. LWVNC

1. Whether the Court must act on gerrymandering, because there is no alternative remedy as a practical matter.

In unpacking this question, Justice Gorsuch specifically asked Mr. Clement whether redistricting ballot initiatives—like the ones that were successful in the 2018 midterm election—and legislative action—like the For the People Act democracy reform package—were solutions that show that it was unnecessary for the Court to set a standard.

Mr. Clement responded that both ballot initiatives and Congress had the authority to correct gerrymandering, and legislative action could resolve this issue without the Court drawing a line in the sand.

However, Attorney Bondurant countered Clement’s argument, saying that, while citizen ballot initiatives seem like a fix, that is a flawed assumption, “because the vast majority of states east of the Mississippi, including North Carolina do not have [a] citizen initiative” option.

Attorney Riggs built upon this argument, stating that “this case is not the first North Carolina voting case to reach this Court this decade, but it represents the most extreme example of a non-responsive legislature that believes that this Court will implicitly endorse unfettered partisan manipulation in redistricting by declining to rein in this most egregious example.”

2. Whether the real legal argument between the parties during redistricting is nothing more than proportional representation masquerading in a vote dilution costume.

According to Merriam-Webster dictionary, proportional representation is defined as an electoral system where the number of seats held by a political group or the number of popular votes received determines party power in a legislative body.  For example, if 54% of voters in a given state or district identify with Party A, and 46% of voters identify with Party B, a proportionally represented election would result in Party A picking up 54% of the potential seats and Party B picking up the remaining 46% of potential seats.

Attorney Riggs answered the question by stating that the vote dilution test provides plenty of room for non-proportional plans. She also pointed out that, “the legal standard in question is severe and durable effect” and that “all of the social science is just an evidentiary tool, not a legal tool.”

Justice Kagan put a fine point on Ms. Riggs’s argument, stating, “In other words, the state can do whatever it wants, it can depart from proportional representation however much it wants to, however much the natural features of the state would suggest, and it can come up with something that's not proportional representation at all. What it can't do is deviate from that based on partisan considerations.”

The League of Women Voters of the United States and the League of Women Voters of Maryland are listed in a friend of the court brief in the Benisek case, which deals with a partisan gerrymander designed by Democrats in a single district and does not have a district-by-district or statewide discussion. Michael Kimberly, attorney for John Benisek, argued that it is important to review both North Carolina cases and the Maryland case together to determine which standard can neutrally apply. Specifically, “in order to prove an actionable burden in any partisan gerrymandering case, the plaintiffs have to come forward and show that electoral outcomes have been changed in the past and will continue to be changed until the map is altered.” The three cases allow the court a better look at the impact of the intentionally egregious electoral outcome.

In sum, the Court focused its inquiries around these two key issues. Additionally, the Court’s choice to hear the Benisek case alongside the Rucho cases created a thoughtful advocacy exercise in hashing out these two extreme cases. We are hopeful this can be done in a way that encourages the court to establish a standard that will weed out the most egregious gerrymandering plans, like the ones designed in North Carolina and Maryland. Perhaps more importantly, however, a standard set by the Court would provide guidance in the next redistricting cycle on how legislatures must apply neutral redistricting criteria to yield more equitable maps, which also would protect the court from a flood of litigation in 2021.