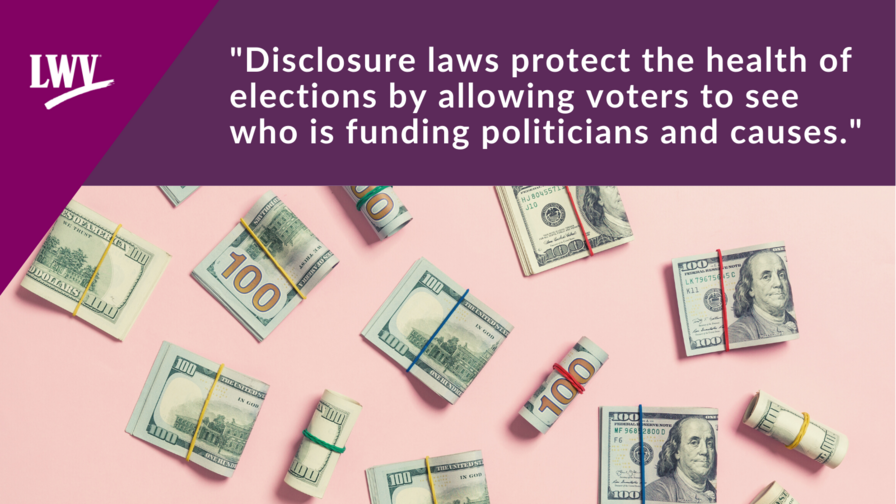 Issues to Watch: Money in Politics and Financial Disclosures

The League of Women Voters fights for a system that is representative and accountable in its rules regarding money and politics. That’s because a healthy democracy relies on voters having access to information about where campaign money comes from and who it goes to, as these factors indicate how money might affect their choices.

But these principles were threatened in a recent Supreme Court decision known as Americans for Prosperity v. Bonta.

On July 1st, the Supreme Court struck down a California law that required nonprofits to disclose their top donors to the California state equivalent of the IRS. It ruled that the disclosure law violated the nonprofits’ (like Americans for Prosperity’s) First Amendment rights to free association and speech.

The confidential disclosure of donors required by the law was meant to provide the state agency with the information to “detect and investigate fraud, self-dealing, and abuse of organizations’ special tax-exempt status.” This is a vital part of the tax system because it ensures that the organizations granted the privilege of a tax-exempt status don’t abuse it.

In the 1950s and 1960s, an exemption was created that allowed organizations to withhold donor disclosures in cases where they might be threatened should their identities leak, resulting in the slowing of donations. This exemption was created in light of the violence and threats that donors to civil rights organizations were facing, including threats of bodily harm or even death.

The challengers in AFP v. Bonta argued that the disclosure law violated their First Amendment rights and that the exemption should cover their donors. They argued that donors to Americans for Prosperity faced threats and should be protected under the exemption even though they showed no evidence of donations slowing due to perceived “threats.”

In response, the Court held that organizations that were challenging disclosure provisions no longer had to show that they had been negatively impacted to become exempt. While the decision only concerned nonprofit disclosures, the implications for campaign finance are clear. The Court has given a basis for other disclosure requirements to be challenged under the First Amendment.

The Next Threat to Disclosure Provisions: Gaspee v. Mederos

This case involves a challenge brought by the Gaspee Project and the Illinois Opportunity Project against the campaign disclosure provisions of the state’s Independent Expenditures and Electioneering Communications Act. These provisions require organizations that spend more than $1000 on “independent expenditures” or “electioneering communications” in state elections to disclose their larger donors. This type of disclosure is common throughout states as a way to ensure accountability for money in politics. Like the laws challenged in American for Prosperity v. Bonta, these laws help the state protect against fraud and financial abuse.

Unfortunately, under the new holding from the Court, these disclosures could be in jeopardy. The basis for the holding in Americans for Prosperity v. Bonta could be extended from nonprofit disclosures to election disclosures, which would threaten the health and transparency of our democracy.

Disclosure laws protect the health of elections by allowing voters to see who is funding politicians and causes. Determining against them in Gaspee would call into question countless disclosure laws and regulations that promote transparency.

Dark money and special interests do not need extra loopholes to undermine democracy. The League is committed to protecting our disclosure laws and preserving the ethics and accountability of our electoral system.

Join our efforts by getting involved in financial transparency issues with your state or local League or supporting our advocacy and litigation.

Press Release / July 2, 2021
In the Know: How the League is Transforming Money in Politics

Voters have an interest in knowing where politicians and organizations are getting their money and how that money is being spent. To that end, dark-money and wealthy special interest groups do not need more loopholes.

The mission of the League of Women Voters is to empower voters and defend democracy. In the first half of 2021, LWV has done just that through a variety of cases nationwide.