Juneteenth: A Celebration of Emancipation and Black Liberation

Juneteenth is the oldest nationally celebrated commemoration of the ending of slavery in the United States, and just one of several “Emancipation Days” observed by Black diasporic communities in the Caribbean, Mexico, Canada, and the U.S.

The holiday is celebrated on June 19th (thus the name, Juneteenth) because, on that date in 1865, Union soldiers announced to enslaved persons in Texas that the U.S. Civil War had ended and that they had been freed from bondage by the Emancipation Proclamation (two years prior in 1863). Freed Black and Afro-Indigenous people from Texas brought the celebration with them when they migrated to nearby places like Louisiana, Arkansas, Oklahoma, and Mexico and—even farther—to California, Oregon, and Washington state.

Juneteenth is a communal celebration, nowadays commemorated with events like block parties, cookouts, parades, and rodeos. In my home state of Oklahoma, I witnessed my aunt organize a two-day block party complete with competitions, games, food, and live performances. Like many memorial occasions in the Black diasporic tradition, Juneteenth is a celebratory, instead of solemn, commemoration. Festivities I witnessed in both Oklahoma City, OK, and Oakland, CA, centered joyous observation of the long-fought for end of U.S. chattel slavery and the status of Black liberation in this country.

However, the fight for Black liberation was not resolved with the end of slavery and the close of the U.S. Civil War. The U.S. has failed to extend the promise of liberty to all, and while no one is more cognizant of that fact than Black—and Indigenous and Afro-Indigenous—people, recent high-profile killings of Black people have similarly spurred global enlightenment.

Anti-Blackness and Racial Disparities in the U.S.

Millions of people are protesting across the country and internationally following the killings of Breonna Taylor and George Floyd by police in Louisville and Minneapolis, respectively. While these recent killings were the catalyst for the protests, activists in this country and abroad are demanding justice and accountability for abuse and killings suffered by Black people across the globe, both before and after the killings of Ms. Taylor and Mr. Floyd.

Activists are also demanding better conditions for Black people in every area of life because of the racial disparities that still exist.

For example, White households hold significantly more wealth than Black households even when educational attainment, employment status, income levels, and homeownership between White and Black households are the same. A GAO study of the 2013-2014 K-12 school year and the Civil Rights Data Collection data from the 2015-2016 school year showed that Black students were overrepresented in school disciplinary actions, were referred to law enforcement for arrest, and were arrested at rates disproportionate to their population size.

Black community leaders and antiracist advocates have created several organizations and movements over the past 150-plus years in pursuit of Black liberation. If nothing else, we should be familiar with at least two recently created ones: The #SayHerName campaign was created in 2014 to bring awareness to the names and stories of Black women and girls who have suffered racist police violence. The #BlackLivesMatter movement, and later the Black Lives Matter Global Network, were founded and developed in response to numerous failures to hold anyone accountable for the killings of Black folks, including Trayvon Martin, Tanisha Anderson, Sandra Bland, and Michael Brown. 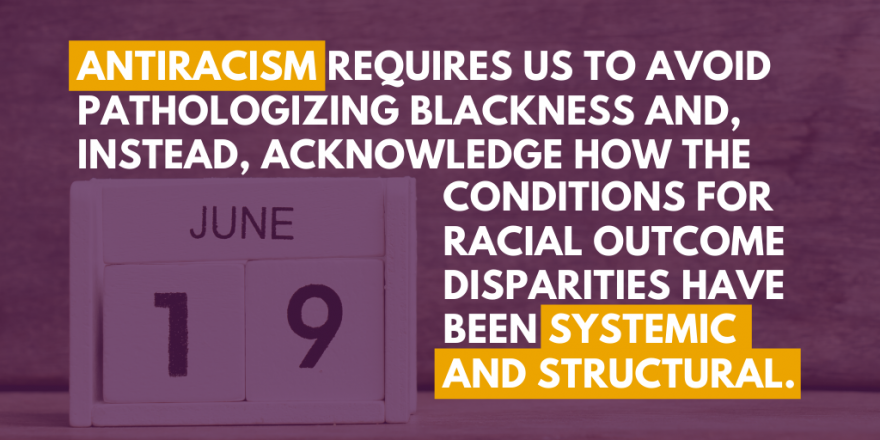 The League’s Work to Expand and Protect the Vote

In this year of our 100th Anniversary, Leagues across the country have acknowledged our complicity in the historic failure of democracy to work for all, including the exclusion of Black women in the League’s early years and the abandonment of Black suffragists as a whole.

Today, we have not only expanded our voting rights advocacy to all, but we’ve also expanded our advocacy portfolio to include climate change, gun safety, immigration, and LGBTQ+ protections, just to name a few. We also partner and work in coalition with many organizations who fight for economic and criminal justice for Black people.

Currently, the League is participating in 21 lawsuits in 18 states to hold election officials accountable for failure to mitigate the effects the COVID-19 pandemic—which is disproportionately affecting Black and Indigenous communities—is having on elections. These lawsuits aim to maintain a variety of voting options, including in-person voting, so that COVID-19 mitigation cannot be used as a pretense for disenfranchisement. We are also supporting several efforts to prevent voter purges and to defeat vote dilution and racial gerrymandering in state and federal courts.

This week, hundreds of our members are gearing up for a day-long lobbying effort on behalf of the Voting Rights Advancement Act, a bill that would restore the Voting Rights Act protections stripped in the 2013 Shelby County v. Holder Supreme Court decision. Because, as we saw in Georgia’s June 2020 primary, voter suppression tactics are alive and well, and we know Black voters are disenfranchised when these tactics persist.

The League will continue to lead work in expanding democracy and protecting the vote, on behalf of all people, until this country reflects the world we want to live in.