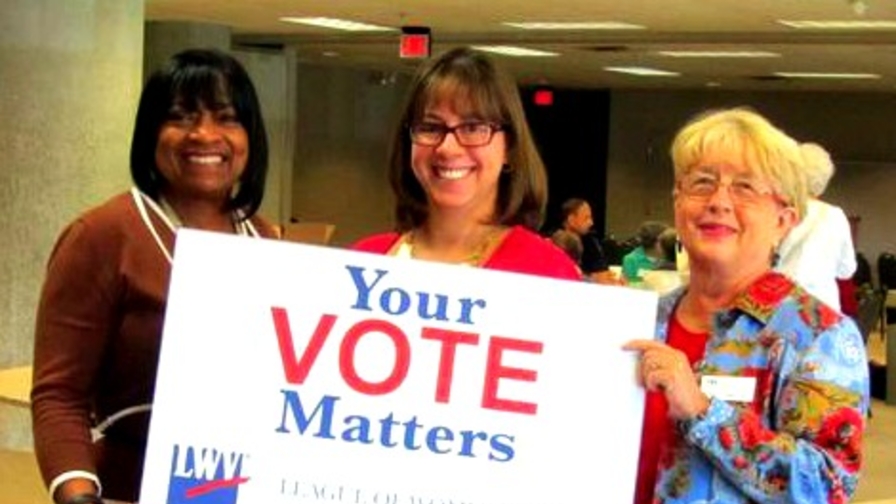 In the region of the country that saw the creation of the national League of Women Voters 95 years ago, the struggle to ensure the right to vote for all citizens continues. For years the League of Women Voters of Kansas has been fighting to protect the voting rights of Kansans from an onslaught of anti-voter legislation. Kansas Secretary of State Kris Kobach has pushed for stronger voter photo ID and proof-of-citizenship requirements since taking office in 2011. Currently, Kansas has some of the strictest laws in the country regarding voting and elections. Most notably, under Kobach’s leadership, Kansas joined with Arizona to push for the inclusion of a proof-of-citizenship requirement on the federal voter registration form. This proposed change was rejected in 2014 by the U.S. Election Assistance Commission.

Earlier this year, Kobach proposed a change to current state law that would require any individual who submits an incomplete state voter registration form to be placed on a suspense list, where the registration is on “hold,” until that voter provides the necessary documentation. According to the new rule, after 90 days on the suspense list, voters who have not sent in the required documents would be taken off the voter rolls completely and would have to re-register. Under current state law, if an individual submits an incomplete form, they are able to send in the required documents at any time. The most common reason for incomplete forms – almost 30,000 of them – is lack of proof-of-citizenship documentation, a requirement on the Kansas state voter registration form since 2011.

Earlier this month, the Kansas League and other voting rights advocates fought to protect the nearly 35,000 voters at risk of being purged from Kansas’ voter rolls by testifying against the proposed changes. In their testimony, the Kansas League cited the costs associated with obtaining proof-of-citizenship documents, which could mean contacting agencies in other states for birth certificates, is beyond what some people can afford. In some instances, receiving documents within the 90 day limit from out of state is nearly impossible. Currently, voters who submit the required documents do so on average eight months after initially registering to vote – well past the 90 day timeframe proposed by the state. The proposed changes put an undue hardship on low-income voters, minorities, the elderly and young voters who lack the resources needed to secure the documents within the timeframe proposed.

The League of Women Voters of Kansas will continue to fight any anti-voter legislation or rules across their state, protecting every citizen’s right to access to fair, free and accessible elections. “We have terrible barriers to voting and to voter registration in our state and they are unnecessary,” Marge Ahrens, co-president of the Kansas League said.