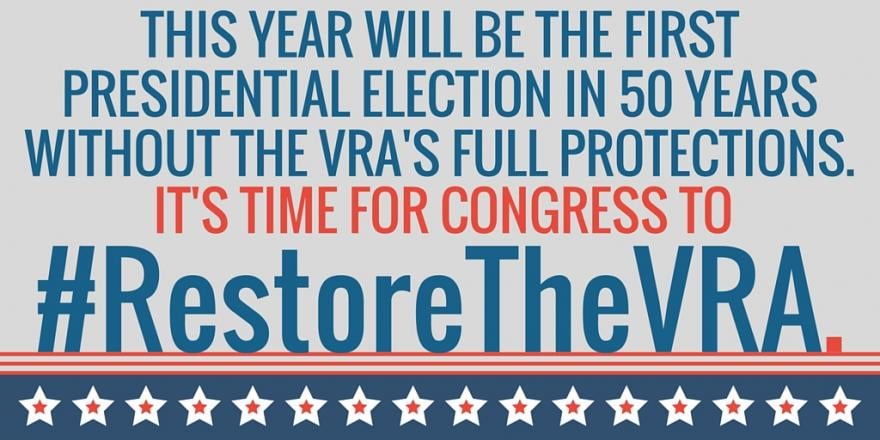 Hundreds of League members from around the country will be lobbying their U.S. Senators and Representatives on Capitol Hill tomorrow in advance of our national Convention. League members will meet with their members of Congress to advocate for the Voting Rights Advancement Act (VRAA).

LWVUS Convention 2016 is an opportunity for Leagues from around the country to send delegates to Washington, D.C. to participate in official League business, and this year, LWVUS is also offering Lobby Day as a pre-Convention activity. Together, delegates will participate in a day of advocacy on Capitol Hill to strengthen our clout around our core issue to protect and expand voting rights.

Help elevate our Lobby Day message by adding your voice to our citizen lobbyists’ – urge your Senators and Representatives to move the Voting Rights Advancement Act forward!

Delegates will be talking to their members of Congress about the Voting Rights Advancement Act which has been introduced in the House and Senate. The legislation is a response to the U.S. Supreme Court’s Shelby County v. Holder decision that gutted key provisions of the Voting Rights Act (VRA) of 1965 and opened the floodgates to the expansion of discriminatory voting laws across the country, primarily at the state and local levels.

Without congressional action to repair the VRA, 2016 will mark the first presidential election in 50 years without its full protections. Discrimination in voting still exists in our country. Throughout the primaries we saw that voters from Texas to Wisconsin, California to North Carolina, faced hurdles getting to the polls because of laws that make it harder for voters, particularly voters of color, to participate in our democracy. Early voting hours are being narrowed, polling places closed and more barriers to voting are being enacted. It is imperative that Congress act to put protections back into place to ensure that Americans across the country have equal opportunity to access the polls and vote in this pivotal election.

Passage of the VRAA will ensure greater transparency and public notice for late-breaking voting changes just before an election, changes in polling resources, and demographic and electoral data. It will also make sure that jurisdictions with a history of discrimination are brought back under the preclearance process to ensure any changes to election law do not have a discriminatory impact. Most of all, the Voting Rights Advancement Act, will level the playing field and ensure that all Americans have fair and equal access to the voting booth.