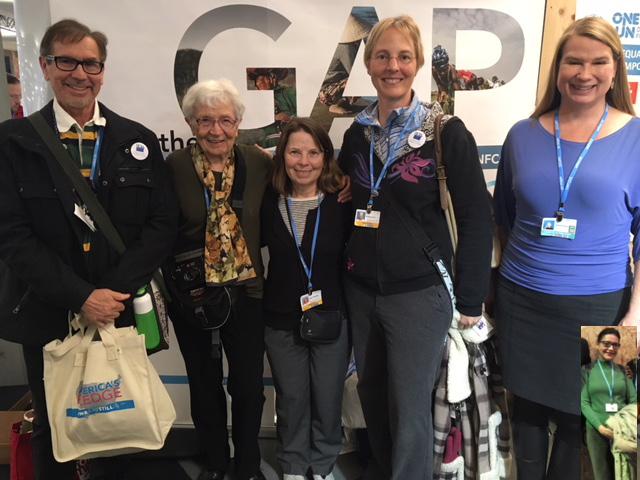 Editorial Note: This article was written by Robin Tokmakian of the 2017 LWVUS UN Observers.

Ten representatives from the League of Women Voters were among the 25,000 attendees from 197 countries to attend the UN's climate conference, COP23, this November in Bonn, Germany.

The LWV is a member of the environmental constituency of NGOs and also participated in the Women and Gender constituency. While the negotiators struggled to come to agreement on how and when to take stock of carbon emissions and financial commitments, the parties did agree to a Gender Action Plan that considers the effect of climate on women (80% of the victims of the 2007 Bangladesh cyclone were women) along with greater gender balance in climate change decision making, gender-responsiveness, increased workshops and technical assistance for women.

Side events provided the LWV delegates with many, many opportunities to learn about what the rest of the world was doing to reduce carbon emissions and adapt to climate change. Such events included panels discussing everything from reducing carbon emissions in the shipping industry, how women and Indigenous people are affected by climate change (a whole day was dedicated to gender issues), to a workshop on “Using Decision-Making Tools and Climate Education to Build Momentum on Climate Change”. One member attended the “Child Rights, Climate Change and Climate Action” discussion which paralleled the LWV’s support of the Children’s Trust Lawsuit, but on a global scale. Some of the events formally announced various countries’ initiatives, including the creation of the Oceans Pathway Partnership (Fiji) and the launching of the “Powering Past Coal Alliance" led by the UK and Canada with more than 20 countries and regional governments joining (including WA and OR).

Besides the US State Department’s participation in the official negotiations, entities from official US government entities (federal and regional) promoted their views on climate change. The federal government, unlike the previous 22 years, did not have an official pavilion to highlight its efforts to reduce climate change. However, regional and local governments, along with US businesses, had the US Climate Center to highlight non-federal efforts. Speakers at this unofficial US pavilion included various governors (including the two Browns from CA and OR), Al Gore, and businesses such as Walmart and Mars. It became the hub for American activism and American denial of current White House policies on Climate Change.

While discouraged by how the official US was addressing climate change, we came away energized knowing that many countries and very vocal young people are pushing for strong actions to address the problem.

Blog
LWVUS UN Observer Shares Insight Into the High Level Political Forum
This blog post was written by LWVUS's Chief Observer to the United Nations, Rosalee Keech.  As the League’s Chief Observer to the UN, I had the privilege of attending the …
Blog
United Nations Framework Convention on Climate Change
In December, the LWV UN Observer for Climate, Robin Tokmakian, and three Delegates (Rebecca Boyd of LWV Wilmette, IL, and Claudia Keith and Cathy Frischmann of LWV Corvallis…