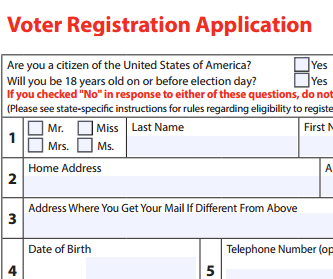 In June, the U.S. Supreme Court ruled that the National Voter Registration Act (NVRA) blocks Arizona’s proof-of-citizenship requirement in relation to the national mail-in application form in the case Arizona v. Inter Tribal Council of Arizona, Inc. (ITCA). Arizona and Kansas are now seeking to circumvent this ruling in the new case against the EAC.

In order to intervene in this case, the League must prove that we have been directly and adversely impacted by the proof-of-citizenship requirements. In fact, the Arizona League was a plaintiff in the Arizona v. ITCA case. In that case, as well as the current case, the Arizona and now Kansas Leagues find that the proof-of-citizenship requirement inhibits them from fulfilling our mission to empower and expand the electorate by registering new voters. In the case that eventually became Arizona v. ITCA, it was reported that over 30,000 people were unable to register to vote because of the requirement.

Leagues across the country maximize their outreach efforts by holding voter registration drives in locations with large numbers of unregistered voters. Yet many eligible voters may not have the required documentation or may not have it with them at any given time and would thereby be prevented from registering to vote in Kansas and Arizona due to this requirement. For example, many married or divorced women with name changes, simply don’t have easy access to documentary proof of their citizenship.

Additionally, there are substantial costs for the League if this requirement is implemented, including educating the public about it and assisting eligible voters in securing the necessary documentation.

Finally, the national League’s online elections resource VOTE411.org would also be impacted by this requirement. We provide an online voter registration tool that utilizes the federal form developed through the NVRA, which allows us to serve eligible voters throughout the country with this multi-jurisdictional form.

With the motion filed, we are now waiting on the judge’s ruling on our intervention. The League is represented by the Brennan Center for Justice and pro bono counsel in this motion.

The next President & Congress must enact democracy reform

The President’s proposal to exclude immigrants in the 2021 redistricting cycle is unconstitutional and unconscionable.