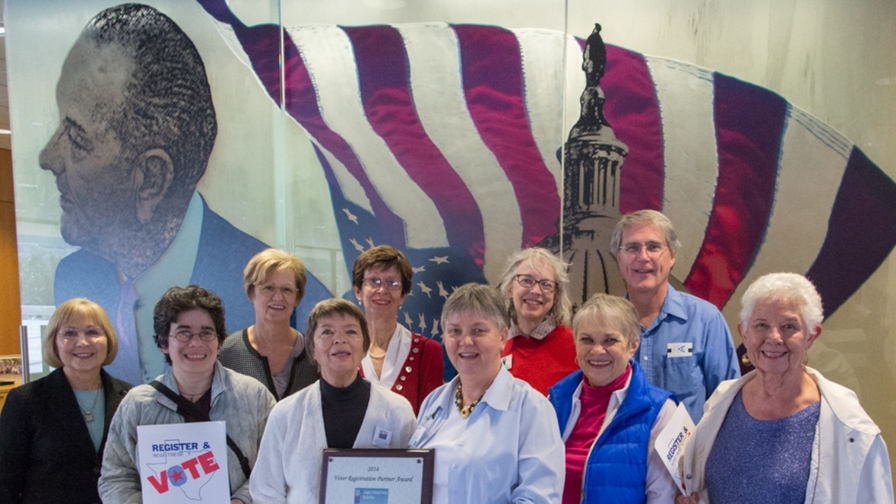 LWV of the Austin Area Recognized for Voter Registration in Travis County, Texas

EDITORIAL NOTE: This guest blog was written by June Conway, voter engagement chair of the League of Women Voters of the Austin Area.

Earlier this year, the League of Women Voters of the Austin (TX) Area was among those honored for their contributions during Travis County's Celebration of Democracy, receiving the Partner Recognition Award. We were recognized for our work hosting voter registration stations at libraries, public forums, college and housing communities, conventions, and many other events from early September through our last day to register to vote prior to the November election.

In addition to the League’s recognition, Austin League member Mary Patrick received Volunteer of the Year for coordinating Volunteer Deputy Registrar training sessions for 88 consecutive weeks. In the state of Texas, those seeking to register others to vote are required to become deputized registrars.

Travis County, Texas, is fortunate in having an engaged, energetic Voter Registrar, Bruce Elfant, who encourages and supports the League’s efforts. Elfant's seeks to increase voter registration to better than 90 percent, to extend registration services to the workplace and to senior high school students, to lobby the Texas Legislature for online voter registration, and to have the highest voter turnout in the state in 2016. We plan to work to support these goals and to register more and more voters in our community.

The Austin League of Women Voters is currently building a foundation for launching expanded voter education efforts in the next two years to the schools, the workplace and the community areas where registration is lowest. Our agenda is an engaged electorate, able and committed to participate in every election.

Learn more about the League of Women Voters of the Austin Area work by following them on Facebook and Twitter.