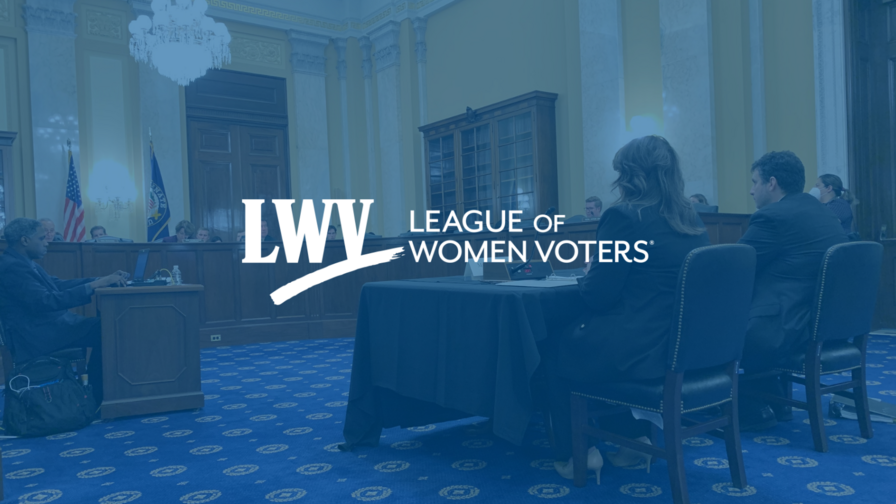 On July 19, 2022, the League's CEO Virginia Kase Solomón spoke before the US Senate Committee on Rules and Administration in favor of the DISCLOSE Act.

This legislation would increase transparency in our elections by requiring large political donors to disclose their identities so voters know who is funding their candidates.

Chairwoman Klobuchar, Ranking Member Blunt, and Members of the Senate Committee on Rules and Administration, my name is Virginia Kase Solomón and I serve as the Chief Executive Officer at the League of Women Voters of the United States, (“The League”). Thank you for the opportunity to testify today on the DISCLOSE Act.

The League of Women Voters is a nonpartisan organization that was founded over one hundred years ago by leaders of the women’s suffragist movement. We are an issue-focused, activist, and grassroots organization that believes voters must play a critical role in our democracy. Since 1920, the League has worked to deliver on our mission to empower voters and defend democracy.

Today, the League has a presence in nearly every community across the country with more than 750 chapters spread across all 50 states and the District of Columbia.

The League has supported the DISCLOSE Act for more than a decade because we believe that our democracy is strengthened when Americans are encouraged to engage in civic participation. We believe Americans deserve to know who is trying to influence their vote. As an organization, the League has fought for nearly five decades to combat the influences of money in politics. Our work reflects our ongoing priority to promote open and honest elections and maximize participation in the political process. Voters have the right to know who is making large campaign contributions to influence elections and when contributions are made, we believe it must be done with transparency. The DISCLOSE Act accomplishes this fundamental purpose by requiring expenditures and donations of $10,000 and above to be reported.

Every day, the League works to inform voters about the issues they care about by providing critical voter services to the public.  In the last two years, almost 6.5 million users came to VOTE411.org, the League’s award-winning nonpartisan website for election information that voters need. The site provides registration tools, candidate guides, and resources about what they need to take with them when they go to vote. As an organization, we work to simplify the voting process for voters to make their individual voting plans. These actions make the voting process understandable and accessible, which breaks down barriers to participation.

Voters have the right to know who is making large campaign contributions to influence elections...[t]he DISCLOSE Act accomplishes this fundamental purpose.

However, it should not fall to organizations such as the League to provide information and ensure transparency in our election process. The law should require public disclosure when it comes to dark money groups seeking to influence elections. Transparency is a baseline requirement for a healthy democracy.

According to a nationwide study conducted by the Campaign Legal Center, about 60% of voters believe that major changes are needed to our country's campaign finance system. The majority of voters surveyed also believe that the money spent by special interest groups has a direct impact on their lives. And we have seen that without transparency, candidates and election officials fall into the trap of valuing donors and their priorities above the needs of voters. Such de-prioritization of voters only breeds distrust in the republic and those who lead it. There should be little question that this runs counter to the spirit of our democracy and a government of, by, and for the people. 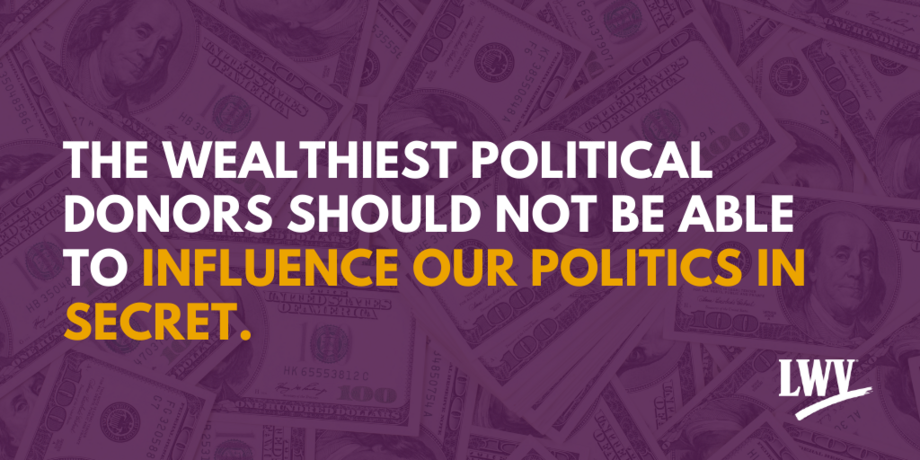 Dark money spans the political spectrum and is used by both Democrats and Republicans to boost candidates. In fact, in 2020, a majority of outside funding was spent to promote Democratic candidates.

Open Secrets, the nation’s premier research group tracking money in US politics, estimates that $1 billion dollars in dark money was spent in the 2020 elections. Shell companies, outside groups, and political non-profits funneled millions of dollars to Super PACs which help to hide the individual source of donations. Secret campaign money, no matter the party, promotes unbridled power and has no place in American democracy. It undermines the role of the voter and corrupts the election process.

The League will continue to fight to ensure that voters can make decisions free from the influence of dark money and special interest groups. We strongly support the DISCLOSE Act and urge this committee to take up this legislation and advance it to the full Senate for a vote as quickly as possible.

Thank you again for the opportunity to testify on this important legislation. I can take your questions today and I look forward to finding ways that the League of Women Voters can continue working with you on this important issue moving forward.

Tell Your Senators to Pass the DISCLOSE Act