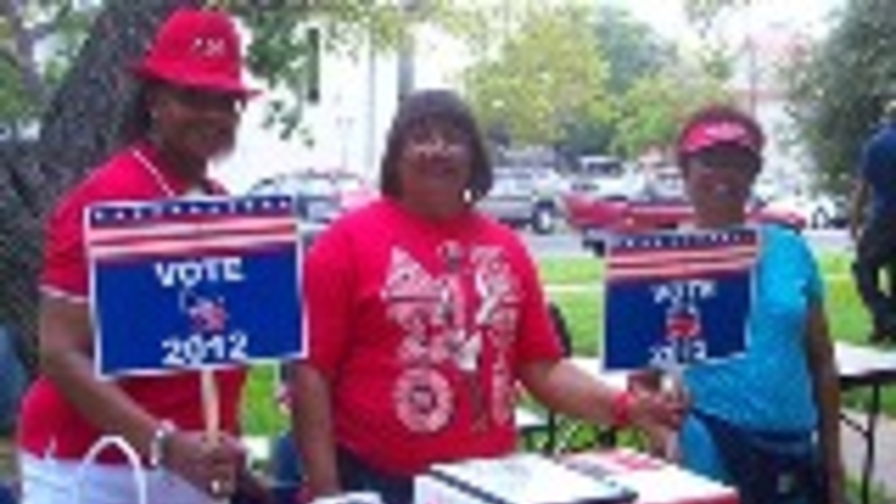 The League of Women Voters’ fourth consecutive Youth Voter Registration Program kicked off this week in nearly 40 communities nationwide. Over the next several months, local League volunteer teams in 15 states will visit local high schools, community colleges and technical/vocational schools in order to help young people get registered and ready to vote in 2014. This work will build on and supplement the numerous voter registration drives Leagues across the country hold every year.

With work already underway in several places, League volunteers are gearing up to visit an estimated 250 schools before the end of the school year. They’ll be setting up in classrooms, outside cafeterias, on community college quads and at a wide range of springtime school events with one goal in mind: helping as many eligible young people as possible register to vote. League volunteers will also equip the students for a smooth Election Day experience by giving them the tools they need to successfully cast a vote for the first time, including sharing helpful resources like the League’s nationwide election information website, www.VOTE411.org.

League volunteers will visit community college campuses across central Florida and North Carolina, hoping to build upon relationships first established with schools in 2012. Major efforts are being planned to reach as many eligible students as possible in eight communities in South Carolina and in nearly a dozen communities on Long Island (NY).  In Juneau, Alaska, League volunteers plan to visit hard-to-reach high schools that are only accessible by air or water. In Kansas, League volunteers plan to visit schools that predominantly serve Native American communities. And in Illinois, League leaders will be out in full force in local high schools in order to take advantage of a new law that permits 17-year-olds to participate in this year’s primary elections, as long as they will be 18 by the November general election.

Millennial voters now make up a major subset of the American electorate and have the potential to affect the outcome of every election. According to the experts at CIRCLE (The Center for Information and Research on Civic Learning and Engagement), however, the rate of youth registration and voting has lagged in recent years. In general, young people are significantly underrepresented within the electorate; in 2012, 62 percent of Americans cast a ballot compared to only 45 percent of eligible young people. Unfortunately, this represents a drop from 2008, when about 51 percent of young people voted.

One key to boosting youth turnout is hosting community-based voter registration drives, which can help fill the gaps in voter registration among the most underrepresented groups of young voters, including low incoming and non-college youth—who are more ethnically diverse and more likely to identify as LGBT than their college-educated peers. Only 35 percent of young people with no college experience turned out to vote in 2012, with lack of registration being a key barrier standing in the way of their participation. The League’s program specifically aims to target the high schools and other institutions serving likely non-college youth in order to provide voter registration opportunities.

Since 2010, local League affiliates have helped tens of thousands of high school and community college students register to vote. We believe our work is key to helping empower more young people to participate. Interested partners are encouraged to download our updated Empowering the Voters of Tomorrow High School Voter Registration Training Manual, which represents the best of what League volunteers have learned about hosting effective youth voter registration drives.

Stay tuned for updates as our work gets underway!

Blog / May 24, 2019
High Schoolers want to vote—we have a responsibility to show them how