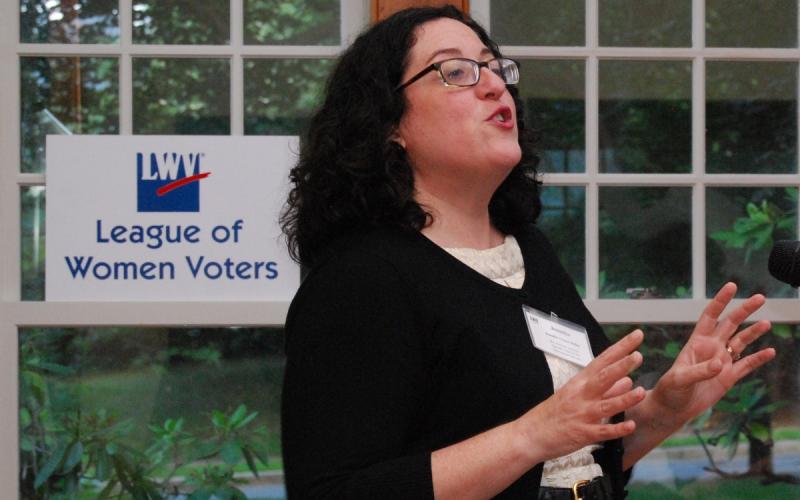 Last June the U.S. Supreme Court, in a unanimous decision in McCullen v. Coakley, struck down Massachusetts’ buffer zone law. The League of Women Voters of Massachusetts (LWVMA) had joined an amicus brief to the case, in which we and 31 other organizations urged the Court to uphold a fixed, 35-foot, content-neutral buffer zone in front of the entrance to reproductive health facilities. The Court’s decision was a grave disappointment to LWVMA.

But the story did not end there; in the wake of the Court’s decision, the Massachusetts League and other groups immediately began advocating for new legislation to ensure that all women continue to have access to reproductive health services without the threat of fear, intimidation or physical harm. The result was  An Act to Promote Public Safety and Protect Access to Reproductive Health Care Facilities, signed into law by Governor Deval Patrick on July 30, 2014 – a mere 34 days after the McCullen decision.

This new law gives police the authority to disperse protesters who are substantially impeding access to a clinic and requires those protestors to stay at least 25 feet from the clinic’s entrances for up to eight hours. The League of Women Voters of Massachusetts submitted testimony in support of this legislation.

Our testimony emphasized LWVMA’s position supporting an individual’s right to make informed reproductive decisions based on his or her own convictions and beliefs (PDF), dating to 1972 – the year before the Supreme Court’s decision in Roe v. Wade that legalized abortion services throughout the country. As our testimony noted, LWVMA was a co-plaintiff with Planned Parenthood in a successful 1989 case against Operation Rescue for physically blocking abortion clinics. In addition, LWVMA has long supported preventive measures to avoid unwanted pregnancies; access to family planning information; and distribution of information about contraception and sterilization.

The testimony also noted that while LWVMA strongly supports the constitutional rights to freedom of speech and peaceful assembly, we recognize that these rights may be limited, particularly when exercising them endangers the safety of others or restricts the ability of others to legally assemble.

The passage of the new buffer zone was greeted with relief by LWVMA—and, through a happy coincidence, many of our members were able to celebrate its passage together. On July 23, members of LWVMA were gathered at a special League event featuring Massachusetts Assistant Attorney General Jennifer Grace Miller (pictured above), who had argued McCullen on behalf of the Commonwealth before the U.S. Supreme Court. After Miller finished sharing her riveting analysis of the case and the decision with us, she glanced at her phone to check on the status of the legislation and was able to announce, amidst cheers, that the House had just passed the bill and it would be moving to the Governor’s desk for his signature.

Today, as we reflect on the 42nd anniversary of the monumental decision in Roe v. Wade that granted women access to legal abortion care, LWVMA is proud of its long history supporting women’s reproductive rights in Massachusetts. We are proud to continue to play a role in the fight to ensure that women in this state, and across the country, continue to have safe and unimpeded access to reproductive health facilities.