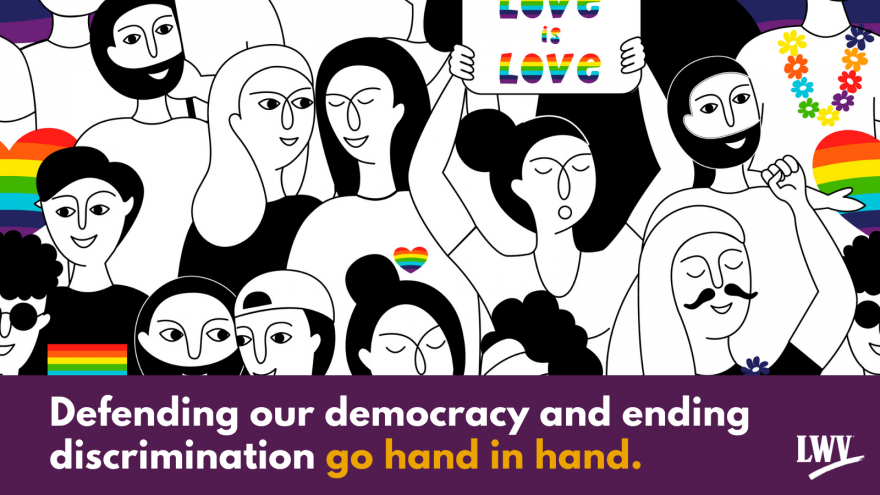 Defending our democracy and ending discrimination against the LGBTQ+ community go hand in hand.  Since Stonewall, we have taken major steps towards equality, but there is still work to be done.

That’s why our advocacy work is so crucial; it has allowed us to support federal legislation targeting hate crimes, fight against legislation that would limit healthcare benefits for same-sex partners, and support the passage of the Equality Act.

In addition to advocacy, the promotion of equal rights requires a legal commitment. In the past year, The League signed on to many amicus briefs to defend the LGBTQ+ community from the wave of attacks on their rights. Many of these cases could have detrimental impacts on the rights of LGBTQ+ people and other underrepresented groups. We’ve illustrated a few such cases below:

Our most recent case at the Supreme Court is Fulton v City of Philadelphia. This case involves a challenge brought by two agencies that didn't follow Philadelphia’s anti-discrimination policy. The agencies refused to home children with same-sex couples because they claimed it would violate the agencies’ religious beliefs.

LGBTQ+ couples are currently six times more likely than heterosexual couples to raise a child in foster care. If this exemption is allowed to go forward, it will harm children by discriminating against the largest population of caregivers. This will have a particularly strong impact on children of color, older children, and, notably, LGBTQ+ youth, who are overrepresented in the foster care system. Denying children in the foster care system the opportunity to be in a loving, supportive home is not acceptable.

LGBTQ+ couples are currently six times more likely than heterosexual couples to raise a child in foster care. If this exemption is allowed to go forward, it will harm children by discriminating against the largest population of caregivers.

The Supreme Court will decide whether a city may exclude private agencies from their taxpayer-funded foster care system because of their refusal to adhere to anti-discrimination policies. Our amicus brief argues that exempting agencies from following an anti-discrimination policy like this will open a loophole for people to discriminate against underrepresented groups, including communities of color and the LGBTQ+ community, by weaponizing the First Amendment.

When an organization is granted a government contract, they are agreeing to act on the government’s behalf and to abide by their policies, including the anti-discrimination policies. Foster care programs make decisions based on the best choice for a child. Excluding LGBTQ+ parents from fostering children is harmful. Allowing private groups to opt-out of anti-discrimination policies will harm not only the foster care system but will open the door for other unnecessary exemptions.

Following the Supreme Court’s ruling that gay and transgender employees are protected under Title VII, a new wave of anti-transgender laws have been introduced across the country. Many of these laws target transgender women and girls’ participation in sports.

In Hecox v Little, we joined an amicus brief to oppose Idaho’s Fairness in Women’s Sports Act, which prohibits transgender women and girls, intersex persons, and any non-binary person from taking part in women’s sports. This law was introduced by a state representative who alleged that transgender women and girls’ participation in women’s sports was a “threat” and based on the “inherent, physiological differences between males and females.” Our brief argues that under Title IX, this law is illegal, harmful, and unnecessary.

Despite the title of the law implying that it promotes “fairness,” this bill does nothing more than hurt both transgender and cisgender women. It allows people to be excluded from sports based on how closely they conform to gender stereotypes. It subjects them to arbitrary, Eurocentric standards of what it means to be a woman.

Further, if a person raises a dispute of a person’s gender, it requires the accused person to go to a healthcare provider to verify the student’s biological sex. The doctor must base the health examination on “the student’s reproductive anatomy, genetic makeup, or endogenously produced testosterone.” This health examination requirement would apply to children as young as those in elementary school.

Laws like these are extremely harmful. It subjects children to baseless standards that are more likely to harm their mental and physical health.

The League will continue to fight for equal rights for every person. Our dedication to creating a more inclusive and fair society means that we must call out injustices like those we see in the above cases. We hope you’ll join us in these fights.

The League of Women Voters is dedicated to ensuring equal rights and equal opportunity for all. This commitment led to LWVUS joining the legal challenge to Idaho’s Fairness in Women’s Sports Act which prohibits transgender women and girls, intersex persons, and any non-binary person from participating in sports.