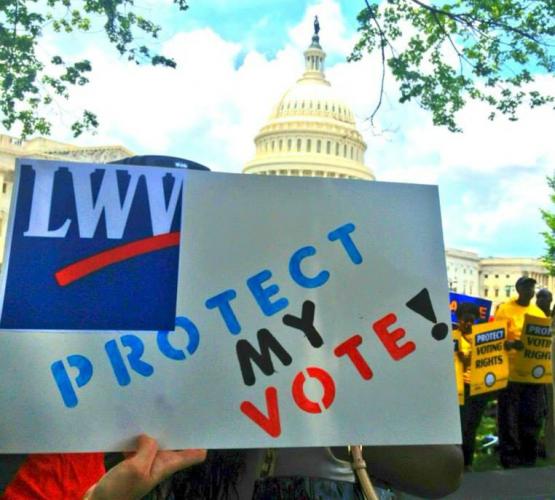 EDITORIAL NOTE: This guest blog post was written by Rosalee Keech, a member of the LWVUS Board of Directors and our UN Observer

This week, I attended a powerful program at the Mission of the United States to the United Nations in commemoration of the 50th anniversary of the Voting Rights Act (VRA) of 1965. Ambassador Samantha Power, U.S. Permanent Representative to the United Nations, opened the event reminding us that “it was a people’s movement that finally moved American legislators to guarantee African-Americans the right to vote.”

“The Voting Rights Act of 1965 is a seminal piece of legislation. It undid a more-than-90 year-old legal apparatus which stopped many African-Americans from voting – and it paved the way for greater participation and inclusion of African-Americans in this country’s process, to the great benefit of everyone.”

The U.S. Mission was packed with representatives from member states, local high school students and representatives from American non-governmental organizations, including the League. When a short film was shown on the attempts to gain access to the Selma, AL town hall in 1965 to register to vote, you could have heard a pin drop. The despicable actions by local police and the capturing of those moments by television cameras and microphones, were instrumental in changing the hearts and minds of good people everywhere in petitioning American legislators to pass the Voting Rights Act.

Following Ambassador Power’s remarks and the video, Sewell Chan, Op-Ed/Sunday Review Deputy Editor of the New York Times, moderated a discussion with Wade Henderson, president & CEO of the Leadership Conference on Civil and Human Rights and Sherrilyn Ifill, president & director-counsel of the NAACP Legal Defense and Educational Fund. Their insightful remarks on how the U.S. Supreme Court has “gutted” the Voting Rights Act and the resulting impact to disenfranchise hundreds of thousands of people, mesmerized the audience.

Since the U.S. Supreme Court’s 2013 decision in Shelby v. Holder, the U.S. Congress has done nothing to restore those rights. Ifill indicated that in Texas, as a result of the decision, 600,000 voters were rendered ineligible to vote. Due to the Court’s decision, litigation would need to be filed in every impacted jurisdiction to ensure voters access to the ballot rather than relying on the administrative process that was ruled unconstitutional. The impact is that people are disenfranchised while the suit is going on, allowing politicians to be elected by a small percentage of the population and then run as incumbents when the lawsuit is resolved. “Elections are controlled at the local level and that’s where the mischief happens,” Ifill said as she relayed tactics used by an all-white board of alderman in Kilmichael, MS to cancel elections in 2001, as the number of registered black voters reached more than 50 percent. The U.S. Department of Justice was able to intervene and force a special election because of the Voting Rights Act.

Henderson was asked “why now?” He reminded us that “America’s democracy is a work in progress” where it is not “guaranteed.” Remaining vigilant, speaking out about injustices and working with partners to urge Congress repair the Voting Rights Act are some of the efforts being made by civil and voting rights groups like the NAACP LDF, the Leadership Conference and the League.

Ifill cited the need to educate students on the need for civic participation and strongly suggested that it occur in the schools. “We need to show them that when voters don’t vote, it allows politics to fail.” Mr. Henderson went on to praise the League of Women Voters for our outstanding work in fighting voter discrimination, enabling voters to get out and vote and our work to shine a light on how the redistricting process is also a means of impacting election results.

It is so important for the League to use its influence at the national, state and local levels to register more voters and to illuminate what happens when people aren’t engaged with the political process. The League has been at the forefront of efforts to repair the Voting Rights Act and will not stop until our elections are fair, free and accessible to all eligible citizens. We have the ability to change the discourse in this country by our words and actions in proving that politics is not a dirty word!