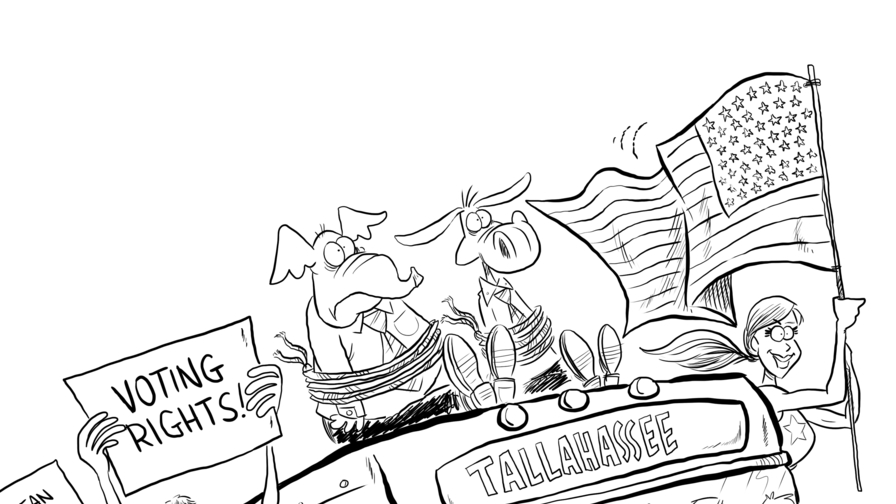 Editorial Note: This blog post is written by Deirdre Macnab,President of the League of Women Voters of Florida.

Even the Koch brothers can't afford the national media coverage Florida received during the 2012 election. It was hard to find a late night comedy show or major network that missed our eight hour lines to vote, and four days to count who won in Florida. But thankfully this nightmare of an Election Day will hopefully not be repeated in 2014.

But first, what caused the 'power outage' during the nation's most important election? What on earth created this chaotic and unorganized voting process in many areas of Florida? The answer: the Florida Legislature.

It was just one year earlier that legislative leaders crafted an "election reform" law that was designed to create a myriad of unnecessary obstacles for voters, in essence putting 'chewing gum in the engine' of Florida's voting process. And did it ever! It caused the long lines and embarrassing delays which resulted in a reported 200,000 citizens to not be able to cast their vote?

In a word, the Florida Legislature outdid themselves. It's hard to imagine anything more un-American than when politicians utilize our election laws for partisan advantage. But that is exactly what we saw in Florida. The outcry after the November 2012 election was loud and the embarrassment for the Legislature was stinging.

Following the recognition of the failure in election administration, the League of Women Voters of Florida played a key role, first calling for a bipartisan Election Reform Task Force, which had been very successful after the 2000 Florida election chaos. Governor Rick Scott said no to this idea, and instead called on his appointed Secretary of State to lead an analysis into what went wrong and come up with recommendations. The League then reached out to Supervisors of Election across Florida, LWVUS and the Brennan Center for Justice, to compile a list of essential recommendations and then we barraged the press with these, asking our members to write letters to the editor in newspapers across the state. We also hosted a number of press conferences for statewide media with different experts on election reform. Reporters, editors and radio announcers from all across the state tuned into these calls.

We also worked hard in the halls of our Capitol, meeting with the committee chairs who were in charge of election reform and making sure they understood the League's requirements. We also sent out a number of letters direct to legislators letting them know exactly what they needed to do to improve access to the polls. This reminder needed to be made frequently, as elements were added to the bill, as well as to combat bad ideas which emerged as amendments. We made these requests both privately and through public editorials to a number of newspapers.

At the end of the day, success must be credited to the spanking that the Legislature took in public opinion, the strong leadership of the Ethics and Elections Committee, and the single minded and assertive perseverance of the Florida League.

The Result? Early voting days were restored with greater flexibility given to Election Supervisors on days, and locations. The Sunday before Election Day was returned as an optional day, and new improvements were given to citizens the right to 'repair' their absentee ballot if they forgot a signature, or their signature had changed. Also, the right to do an address change and vote a regular ballot was restored, and legislative amendments will be held to the same 75 word limit that citizens must adhere to.

The lesson? Our voices as citizens can and do make a difference in ensuring good legislation. It's simple: elected officials must know we are paying attention and we will not be silenced, especially when our most essential right to vote is threatened.