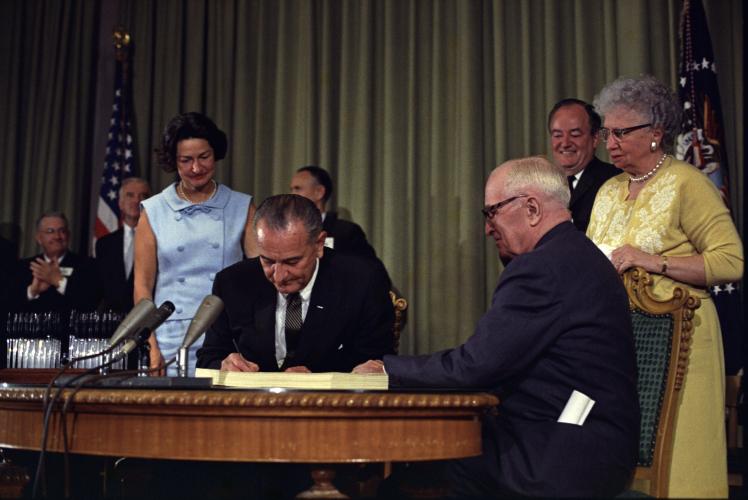 Fifty years ago this week, President Lyndon B. Johnson signed the Social Security Amendments into law thereby creating two of our most influential federal programs – Medicaid and Medicare. Not only did the creation of these programs provide health insurance to millions of low-income and elderly Americans, they have also been integral to promoting income equality among Americans by providing affordable and quality health care to vulnerable populations.

Following the establishment of the Medicaid and Medicare programs, the League lobbied on a range of issues to both protect and bolster these programs, as well as to expand health care coverage and to provide comprehensive health care to all Americans. Most recently, we worked for passage of what became the Affordable Care Act (ACA) which expanded the Medicaid program. Through the ACA, the federal government provided funding to states to expand their Medicaid programs and provide access to more low-income Americans. Leagues across the country have been working to ensure the ACA is implemented correctly in their states, including lobbying for adoption of the Medicaid expansion, while we’ve also been defending the ACA at the U.S. Supreme Court.

As the Affordable Care Act continues to have a significant and very tangible impact on the lives of Americans, we hope that the 16 states who have yet to expand their Medicaid programs will realize the value to their citizens. Regardless, Leagues will continue to work to provide millions of Americans across the country with objective information about our health care system, including celebrating our strong Medicaid and Medicare programs.

The League joined 76 national organizations on a letter to U.S. Senate leadership urging them to reject provisions in the American Health Care Act that would undermine Medicare and Medicaid.

Letters
League Calls for Protection of Medicare Under AHCA

Before the House's failed attempt to repeal the Affordable Care Act, the League joined other organizations on a letter to Speaker Ryan and Leader Pelosi opposing policies in the American Health Car