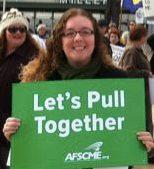 I care about the League’s work because:
Growing up, one of my biggest influencers was my Grandma Kay. She was very active in her community in Wilmington, NC. She was a member of her local League of Women Voters, she served on the board of her local YMCA, and was very involved in the women’s rights movement there in the 70s and 80s. Working for the League means honoring her life and continuing to do the great work she did for decades.

The most inspiring thing I’ve learned from the League and its members is:
It has been inspiring to see so many volunteers in League leadership positions give up their time to fight for worthy causes.

In 2015 and beyond, I look forward to the League:
I am looking forward to continue working with state League leaders to help push for pro-voter legislation, while at the same time fighting against voter discrimination bills during the state legislative cycle.