For the People Act Town Hall in New Mexico 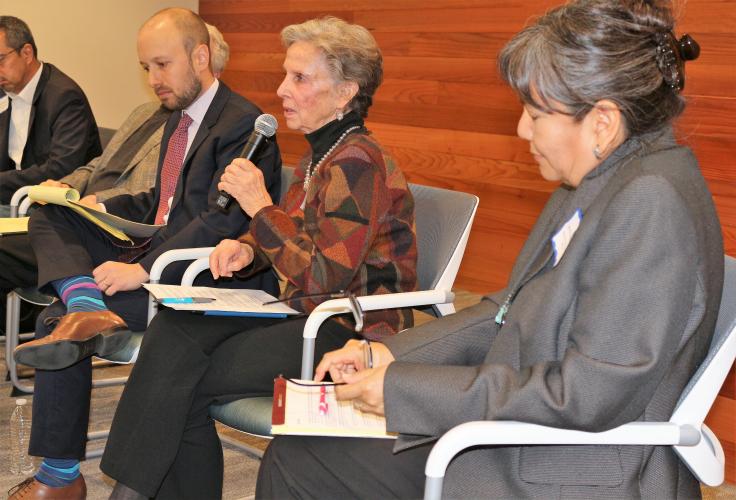 This guest blog post was written by Judy Williams, president of the League of Women Voters of New Mexico.

On May 11 in Albuquerque, New Mexico, the League of Women Voters of New Mexico was invited to participate on a voting rights panel moderated by Senator Tom Udall. Senator Udall is the senior senator from New Mexico (Land of Enchantment, or LOE) and the main sponsor of the For the People Act (SB949), though our entire five-person Congressional delegation supports the bill.

The panel was asked to discuss how we make it easier to vote through improving access and securing voting rights, promoting integrity, and bolstering election security. In addition to me, as President of the New Mexico League, participants included two state legislators and representatives of the Native American Voters Alliance (now re-branded as New Mexico Native Vote) and the Brennan Center for Justice.

Senator Udall was introduced by former Ambassador to Spain Edward Romero, a friend of the Senator. A bit of history – Tom Udall is the son of Stewart Udall, former Interior Secretary, and the nephew of Morris Udall, who represented New Mexico in the U.S. House. After the Senator introduced the panelists, each of us spoke briefly about our work.

I began my remarks with a reminder that February 14, 2020, is the League’s 100th birthday, and I invited them all to the party. I spoke about the League’s main work in voting rights and advocacy and highlighted other Leagues’ success in bringing lawsuits against voter suppression and gerrymandering policies. I also highlighted the League’s multi-state campaign to get a Senate hearing on the For the People Act (FTPA). Finally, I spoke about the voting rights victories in the New Mexico legislature this year, including the passage of automatic voter registration at motor vehicle offices, registration during early voting, same day registration, and a general overhaul of our election laws.

During the Q&A, I spoke about the League’s next priorities in New Mexico. We know there is little appetite in the legislature for an independent redistricting commission, but we have other ideas: we’ll push for fair standards, public accountability, a transparent process, and fair maps.  In addition, the Census is critically important to New Mexico, as we depend a lot on federal funds flowing into the state. But New Mexico is the hardest state to count. I noted that the League has made completing the Census a priority and is working with a coalition of partners to accomplish a complete count in 2020.

Laurie Weahkee of NM Native Vote spoke of the voting difficulties in Native American areas, and her optimism that the provisions affecting Native Americans in the FTPA will go a long way toward ensuring Native voting rights.

A second panel, on campaign finance, spoke about ending the dominance of big money in politics. Members of this panel included the director of Common Cause New Mexico, our strongest partner in the state, and a representative from Public Citizen in Washington, D.C.  Panelists described how a vanishingly small number of people actually control elections through large candidate contributions. Examples included the fact that Medicare cannot negotiate drug prices, and how Big Pharma contributed heavily in the election preceding this vote. Panelists also addressed the effects of secret money and how we can address reforms.

The entire morning was interesting, to panelists and audience alike, and since our Congressional delegation supports the bill, there was no discord. However, there was a lively discussion and an informative presentation of data to support the need for the For the People Act. Everyone was glad to hear that the League will soon celebrate 100 years, and the New Mexico League was honored to play a role in this event.

U.S. House leadership unveiled a democracy reform bill, HR1 (the For the People Act), that will make elections fairer and put power back in the hands of the American people.

The League sent a memo to the U.S. Senate calling for a hearing on the For the People Act.

Following the introduction of the For the People Act in the Senate, we launched a nationwide campaign to promote a hearing on the bill. We published newspaper ads and wrote postcards to Senators.