Reducing the Corrupting Influence of Money in Politics 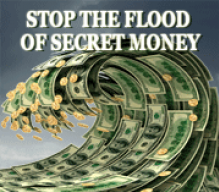 In his State of the Union speech this year, President Obama mentioned that in order to make politics better, the American people alongside politicians from both sides of the aisle must “change the system to reflect our better selves.” As he expanded on this idea, he pointed to several of the League’s priority issues including calling for a bipartisan redistricting system and ensuring access to the vote by making it easier for everyone to vote.

President Obama also called for “reduc[ing] the influence of money in our politics, so that a handful of families or hidden interests can’t bankroll our elections.” As we mark the sixth anniversary of the decision in Citizens United v. FEC, the League would offer up the following four solutions for fighting the corrupting influence of money in politics.

Strengthen Regulations on Coordination: The Federal Election Commission (FEC) is the federal agency in charge of our nation’s campaign finance laws, but so far they’ve done practically nothing to address the U.S. Supreme Court’s disappointing decision in Citizens United. Under existing law, the FEC can work to define “coordination” as a way of cutting back on the “independent” expenditures that really are coordinated with candidate campaigns, but thus far they have refused to do so. Last year, the League provided testimony and sent nearly 30,000  comments to the FEC encouraging them to redefine these two terms and end corruption in politics.

Improve Disclosure: Supreme Court Justice Anthony Kennedy said: “Disclosure permits citizens and shareholders to react to the speech of corporate entities in a proper way.” Citizens have a right to know who is trying to influence their vote, and disclosure of donations and spending is necessary to shine a light on secret money. The League is a longtime supporter of the DISCLOSE Act and we will continue to push for passage of this important piece of legislation.

Establish a Public Financing System: The League believes that public financing is the best long term solution to getting big money out of politics. States like Washington, Connecticut and Maine have had success in public financing with state house and statewide elections. The League continues to look for ways to limit the size and type of contributions from all sources as a means of combating undue influence in the election process.

Vote: As the President alluded during his State of the Union address, if the American public wants to get money out of politics, it’s time to take our elections back. Voting is the most powerful form of expression that a single citizen has. When citizens vote, politicians have to listen. In fact, the only thing that can stop the flood of money is a flood of voters. Each voter who shows up diminishes the influence of every dollar spent trying to swing an election. We must improve voter turnout and engage with our communities to combat the undue influence of money in our political system. Get registered and participate in the upcoming presidential primaries and caucuses!

For decades, the League has worked to ensure that citizen participation in the political process is not drowned out by special interests and big money donors. But in order to end the influence of money in politics it’s going to take more than just the work the League does. We need Congress, the administration and citizens to come together and stand up to outside influences. Only together will we be able to stop the sale of our democracy.

State of the Union Bingo Cards