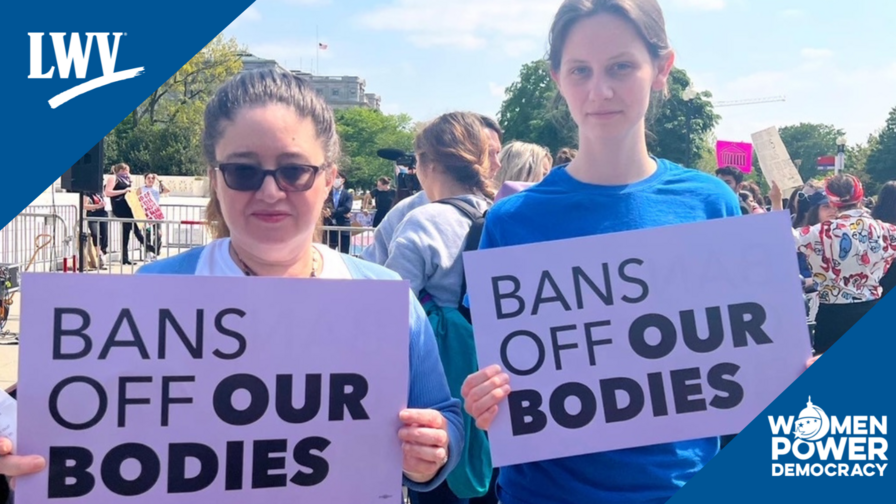 On Tuesday, May 5, the League's national organizing director, Alma Couverthie, spoke on the steps of the Supreme Court regarding the leaked draft opinion in Dobbs v. Jackson Women's Health that would overturn the reproductive rights established in Roe v. Wade and Planned Parenthood v. Casey.

Check out a few takeaway quotes below. You can also read this statement from LWV's CEO Virginia Kase Solomón and board president Dr. Deborah Ann Turner.

You hope that people in power are going to...protect the vulnerable, the marginalized...and this is the opposite of what's happening right now.

Those of us who believe in the promise of our democracy also believe in the power of elected officials to protect the rights of the people. Yet this draft opinion threatens to do the opposite.

Underserved Americans, such as low-income folks and people of color, would overwhelmingly be the ones to suffer the consequences of such a decision. In many states, women of color are the most likely to seek abortions due to limited health care and birth control options. For example, in Mississippi, people of color comprise 41% of the population but 81% of women seeking abortions.

Meanwhile, low-income Americans will be disproportionately impacted by limits to reproductive care. Financial restraints and the inability to take time off work make it harder for them to travel to places where they can legally terminate their pregnancies. If they're unable to do so, they'll face the added financial (not to mention biological and psychological) burden of a new child.

If this draft opinion holds...it not only strips women and pregnant people of their personal autonomy...it will open the door to erode more fundamental rights.

Abortion rights are rooted in the implied Constitutional right to privacy. If Roe and Planned Parenthood are overturned, other personal decisions protected by that same right are threatened.

These include but are not limited to fertility treatments and contraception, LGBTQA+ rights, and interracial marriage.

The League of Women Voters stands with all of our partners and allies in this fight, and we will continue for as long as it takes.

Our ability to participate in our democracy is dependent on our autonomy over our own bodies.

The League of Women Voters signed on as amicus partners in Dobbs in September 2021, and stand in support of the upcoming Bans Off Our Bodies rallies across the nation.

We will continue to follow the lead of reproductive rights organizations across the US in the fight for abortion care.

Blog / December 2, 2021
There is No Equality Without Reproductive Rights

For those who experience pregnancy, our basic freedoms hinge on our ability to make choices about our reproductive health. Our physical and psychological health, ability to gain and maintain employment, financial resources, and even what we can and cannot eat are all dependent on our reproductive choices.