From Seneca Falls to Winston-Salem, the Fight for Voting Rights Continues 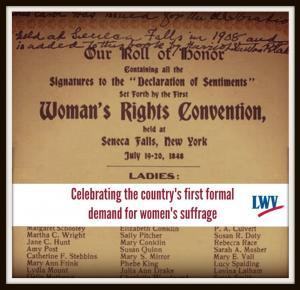 One-hundred sixty-seven years ago next week, on July 19-20 1848, 300 women and men met in Seneca Falls, New York, to discuss "the social, civil and religious condition and rights of Woman." The Seneca Falls Convention produced the Declaration of Sentiments, one of the nation's most important historical documents advocating for women's rights, including the first official call for the right to vote for women.

The Declaration of Sentiments, delineated 11 resolutions on women's rights, and the most controversial was its demand for the right to vote for women. Even among women's rights leaders, the notion of women's suffrage was perceived as deeply controversial at the time. On the second day of the Convention, all 11 resolutions were unanimously passed with the exception of the resolution on women’s suffrage, which produced a long and heated debate. A moving speech made by abolitionist Frederick Douglass helped secure passage of the controversial resolution.

With the passage of the Declaration of Sentiments and its support for the right to vote for women among them, the Convention laid the initial framework for the women's suffrage movement. The men and women of the Seneca Falls Convention understood that access to the vote is not about politics, but about justice and equality. The document made a powerful call for equal voting rights, declaring voting both a “duty” and a “sacred right.”

In 1920, the activists who were inspired by the dedication of those attending the Seneca Falls Convention successfully completed the fight and secured the right to vote for women. As their work to secure the 19th amendment wound down, these activists founded the League of Women Voters to help new voters engage with their government. Over the past 95 years the League has worked to empower voters in every election. The League is at the forefront of the work at local, state and federal level to protect and expand voting rights so that every eligible voter will have the opportunity to cast a vote and have it be counted. Together, we’re fighting to keep the power of our democracy in the hands of the people.

Today, the League honors the women and men who gathered at the Seneca Falls Convention and their tireless work to end barriers denying American women equality and the right to vote. Ninety-five years after our founding, League members continue their work by Making Democracy Work® and continuing to fight to protect the right to vote and make sure access to our elections are free and fair. From advocating for restoration of the Voting Rights Act, which the U.S. Supreme Court partially gutted just over two years ago, to helping lead the challenge of the most restrictive anti-voter law in the country in federal court, the League stands ready to fight for equal access to the ballot for the next 95 years and beyond.