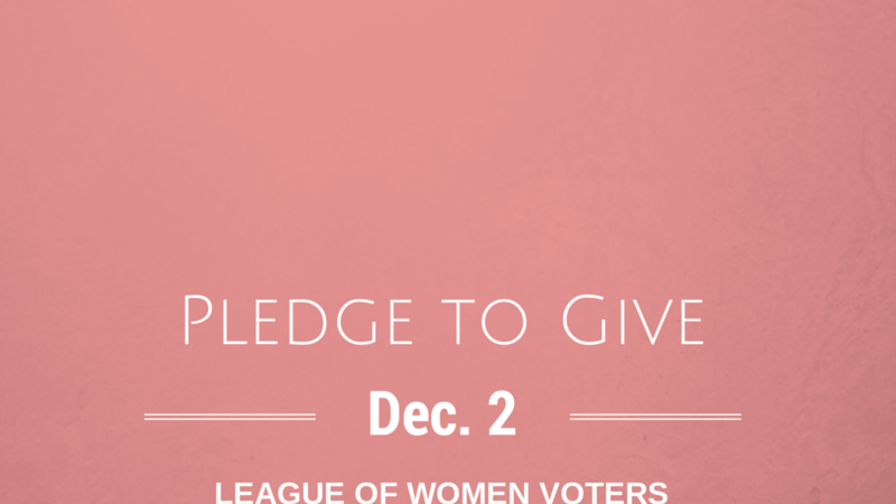 Stand Up for the League on #GivingTuesday

Update: Want to get a head start on #GivingTuesday? Donate to the League today!

We have a day for giving thanks. We have Black Friday and Cyber Monday two-for-one deals. And now we have #GivingTuesday for giving back to the community!

Taking place the Tuesday after Thanksgiving – and subsequently after Black Friday, Small Business Saturday and Cyber Monday – #GivingTuesday is a national day of giving that celebrates and encourages charitable activities to support nonprofit organizations, like the League of Women Voters, during the holiday season. This unofficial holiday is an annual campaign that began in 2012 to help change the conversation about holiday spending.

Building on our success from last year’s #GivingTuesday efforts, the League will participate in the third annual #GivingTuesday campaign on December 2, 2014. Generous League supporters have offered to match every #GivingTuesday donation we receive dollar-for-dollar, up to $10,000.

In the same way that retail stores come together to offer deals, #GivingTuesday brings the nonprofit community together to raise awareness about the importance of supporting our valuable missions and work. Pledge to support our work to empower voters to weigh in and make positive change on the public policy issues that matter most, including protecting voters’ rights, reforming money in politics, and defending the environment on #GivingTuesday.

Year after year, League volunteers work tirelessly to serve their communities, and this year was no different. In 2014, League volunteers registered tens of thousands of voters, held hundreds of candidate debates and issue forums, and provided nonpartisan candidate and ballot information through millions of printed and online voters’ guides. League activists, like you, sent over 50,000 letters to Congress in support of the Voting Rights Amendment Act and fought back against attacks on voting rights at the local, state and federal levels. League voices were also strong on environmental causes, sending nearly 40,000 comments (so far!) to the Environmental Protection Agency to support regulations limiting carbon pollution from new and existing power plants and joining the People’s Climate March in New York City to demand international action to protect our planet.

League supporters across the country will continue to do everything in their power to see that we’re Making Democracy Work®, but the fight requires the help of all of our supporters. #GivingTuesday is propelled by those who believe that passion and commitment can make a difference. From fighting to protect voting rights, to curbing the influx of big money into politics and leading efforts to prevent climate change, the League is committed to informing and engaging Americans around the major public policy issues that impact our daily lives.

On December 2nd, we ask that you think of the League as you reflect on the need to strengthen our great democracy through increased political participation. Pledge to support the League on #GivingTuesday and we’ll send you a reminder email and online donation form on  December 2.