Why We Must Pass the Justice in Policing Act 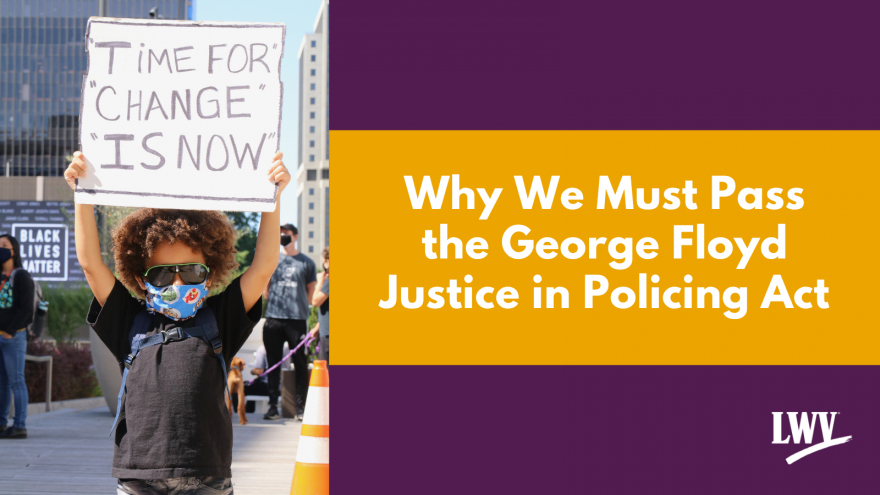 This blog was written by Jennifer Hernandez, an LWV summer 2021 intern.

In the summer of 2020, people all around the globe saw the video of former police  officer Derek Chauvin murdering Texas A&M graduate and father-of-five George Floyd in broad daylight. Social media as well as TV, radio, magazines, and newspapers spread the graphic scene, tugging at the emotions of people across the country who were heartbroken by yet another instance of police brutality and racism. Yet this act of violence against a Black American was nothing new; racism and police brutality have plagued the nation since its founding. The only difference between this act and thousands of others is that it was caught on videotape.

What happened to Floyd exacerbated already growing tensions across a nation that was still reeling from the deaths of Black people at the hands of police, including Philando Castile, Stephon Clark, and Breonna Taylor. Soon after the homicide, demonstrations against police brutality and systemic racism swept the country. Protestors demanded transparency in Chauvin’s investigation. Public figures like John Boyega, Ariana Grande, and Paris Jackson utilized their platforms to raise awareness as protestors marched to the streets. And millions of us took it upon ourselves to learn more about systemic racism, its roots in modern law enforcement, and its unacceptable consequences.

The Facts Behind Police Brutality

Fatal violence against Black and brown folks at the hands of police has gone on for far too long, with few repercussions. Despite the fact that black people are only 19% of the population in Minneapolis, where Floyd was slain, they account for 58% of all police use-of-force occurrences in the city – seven times the amount of their white peers. This isn’t merely a Minneapolis problem. Across the US, Black Americans are 3.23 times more likely to be killed by the police than white Americans. 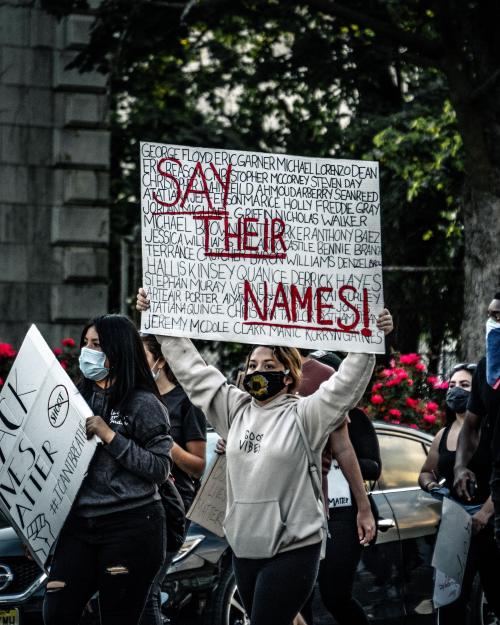 This racist violence isn’t new; modern policing has its roots in historic “slave patrols,” groups of white men who set out to capture self-emancipated Black people during the time of chattel slavery. Violence and dehumanization were inherent parts of this system, and little to no attempts to eradicate them were made as policing became more structured. In recent years, some police departments attempted to tackle their discriminatory roots through diversity and inclusion trainings or other internal measures, but these are not nearly enough. As we saw with the murder of George Floyd, and all of those that followed, police violence is an epidemic in the US.

Since there is no nationwide database that demonstrates the number of excessive force incidents any given police officer has been involved in, departments are relatively independent when determining how they want to handle their cases. This seldom involves charging the officers for acts of violence, even if the violence is fatal.

To illustrate, while an estimated 1100 people are fatally shot by law enforcement each year, only 110 officers have ever been charged with murder or manslaughter in an on-duty shooting. Only 42 of those officers were convicted.

While an estimated 1100 people are fatally shot by law enforcement each year, only 110 officers have ever been charged with murder or manslaughter.

Chauvin had a history of excessive violence prior to 2020. In 2017, he beat a 14-year-old boy and kneeled on his back for 17 minutes while the child cried out for his mother’s aid. Thankfully, this instance was not fatal, though it required hospitalization. Chauvin faced no legal repercussions for his misconduct until his 2021 trial in the murder of George Floyd, when a federal grand jury decided to indict him on a civil-rights charge for his assault on the 14-year-old. Even now, Chauvin’s indictment is an exception in a system that enforces minimal police accountability.

The George Floyd Justice in Policing Act of 2021

It is time for meaningful action, which is why the George Floyd Justice in Policing Act of 2021 needs to pass. This extensive law enforcement reform bill targets police misconduct, excessive force, and racial bias in policing. It supports, among other measures:

The bill also aims to eradicate racial profiling by banning it and requiring officers to receive training on discriminatory profiling.

For far too long, people of color have been denied justice. No one is above the law, especially police officers who have taken an oath to protect, serve and enforce the laws. Passing the George Floyd Justice in Policing Act is a necessary step towards holding officers liable for their actions and prohibiting the tactics that have already caused far too many deaths.

Press Release
LWV Statement on the Justice in Policing Act

The Justice in Policing Act of 2020 is a necessary first step towards eliminating police brutality in America.

This bill provides the necessary first step towards fully addressing systemic constitutional violations by law enforcement officers, and we are pleased to see the US House prioritize this reform this congress.