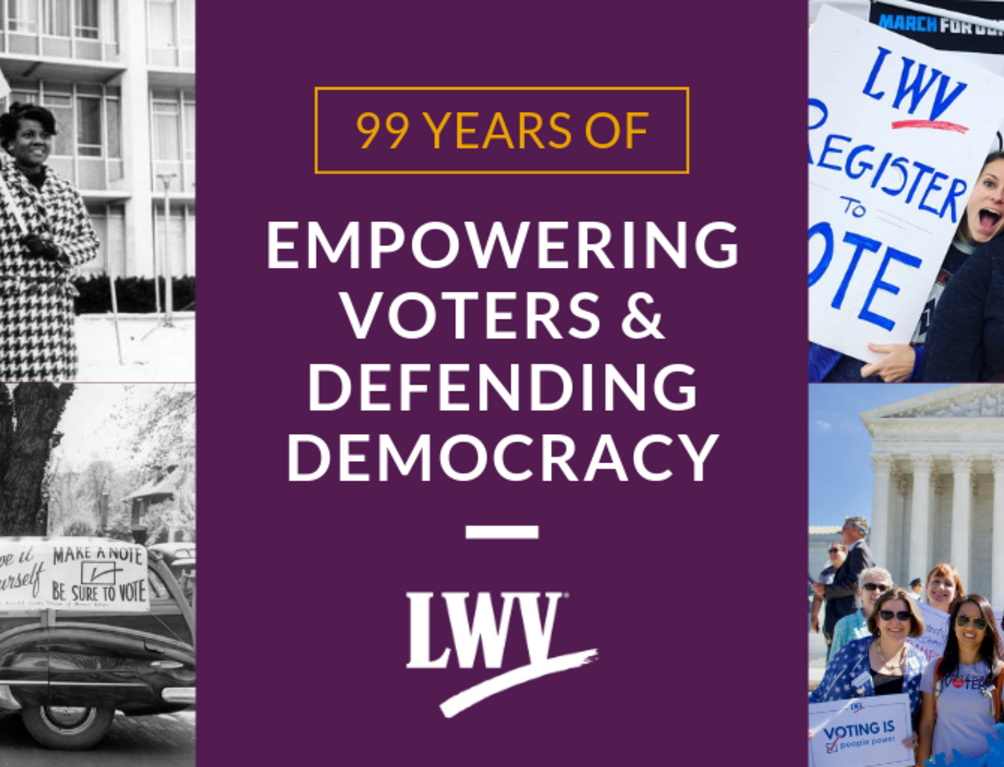 Ninety-nine years ago today, the League of Women Voters was founded at the National American Woman Suffrage Association convention in Chicago, Illinois. The mission of the League in 1920 was to help 20 million American women carry out their new responsibilities as eligible voters. After all, the League was founded just months before the 19th Amendment was ratified.

Throughout the last century, the League has grown along with the American electorate. Today over 65,000 members are active in all 50 states with nearly 750 state and local chapters in communities across the country. Our members and volunteers continue to engage voters through registration and outreach, hosting hundreds of candidate debates and forums every year. In 2018 our organization reached more voters than ever before – even compared to presidential election years.

In court rooms from Arizona to Wisconsin to the United States Supreme Court, we are fighting to protect the rights of voters and defend our democracy. Next month the Supreme Court will hear our redistricting case out of North Carolina. Our case, the League of Women Voters of North Carolina v. Rucho, is a partisan gerrymandering challenge to the state’s congressional map. The court has the opportunity this year to set a standard for what constitutes partisan gerrymandering – which could have a nationwide impact to make our electoral maps fairer and more reflective of our communities.

In Congress right now the League strongly supports major sweeping legislation that will expand voting rights and improve our elections. H.R. 1 or the For the People Act is a comprehensive democracy reform package that includes restoration of the Voting Rights Act, voter registration modernization, public financing of elections through small donor matching funds, ending partisan gerrymandering and more. The League worked behind the scenes to influence the language of this legislation, including a push to include Same Day Registration.

The For the People Act is just what America needs as we prepare for the 2020 election, a year that will commemorate the League's 100th birthday and the centennial celebration of the 19th Amendment.  As we celebrate 100 years of women's suffrage in 2020, we will continue to carry on the legacy of that achievement by making sure ALL eligible voters can exercise their rights and championing the expansion of those rights in the For the People Act.

Today marks the 164th anniversary of the start of the Seneca Falls Convention, when 300 people gathered in Seneca Falls, NY to discuss the role of women in American society.