Building on Women’s History for a Bright Future 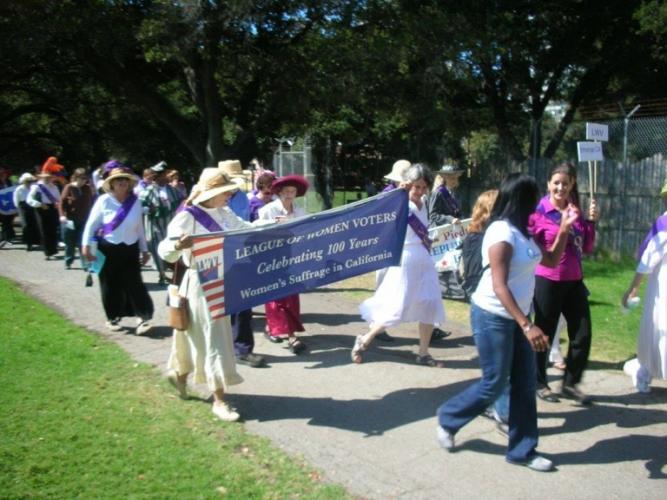 EDITORIAL NOTE: This guest blog post was written by Katherine Gavzy, president of the League of Women Voters of Oakland.

Oakland is a vibrant, diverse city with a tradition of active civic involvement. Like many medium and large cities, we are a city of neighborhoods. The League of Women Voters of Oakland was founded in 1924, just four years after the League of Women Voters of the United States. The Oakland League, like all state and local Leagues, is known for our action and advocacy in our community, as well as for outstanding election-time voter information.

Also like many other Leagues across the country, the Oakland League embraces the history of the suffrage movement that led to the founding of the League. We are proud to highlight our history and work during Women’s History Month, specifically, but also are committed to improving our community throughout the year.

In 1908, Oakland was home to the first suffragist parade in California. In October 2011, the League was one of many organizations that organized and marched in a re-enactment of this parade as we celebrated 100 years of women voting in California. Our Congresswoman Barbara Lee spoke at the event about a resolution honoring the League of Women Voters that she had introduced on the floor of Congress.

While we highlight our important history, the Oakland League also works to ensure that the League continues to be seen as relevant and committed to improving our community. At every election, the Oakland League is the go-to group for candidate forums in the city. The League holds a series of forums that are recorded and replayed by the local public access channel. In addition, we work with numerous neighborhood and other civic organizations to organize forums all over the city. Some of these are on specific topics – education or the arts, for example – while others focus on the issues of a particular neighborhood. We coach civic groups on best practices for these forums, and frequently provide our members to help run them. We have developed a variety of different formats that keep the forums interesting and relevant to the community.

We also work with high schools all over the city to provide voter registration information to graduating seniors. Some of these same high schools also use the Easy Voter Guide in their classrooms before elections.

In addition to our voter service work, the Oakland League also advocates on important community issues. The Oakland League’s Action Committee is currently working with City Council members on a local redistricting reform measure, a supplemental city tax to provide funds for safety and violence prevention programs and updates for the city’s ethics legislation. Our monthly “Hot Topics” informal roundtable discussions on topics of current local interest attract a diverse group of attendees.

During Women’s History Month and every other month, we are active and visible in our community, highlighting our important history, and also looking towards the future by encouraging active participation by all eligible citizens.