The Commission on the Status of Women, the United Nations and the League 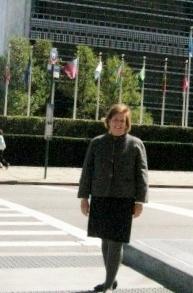 The fifty-eighth session of the Commission on the Status of Women (CSW) took place at United Nations (UN) Headquarters in New York City from March 10 to 21, 2014. The Commission is dedicated to ensuring women’s equality and to promoting women’s rights, with a mandate to “prepare recommendations and reports to the Economic and Social Council on promoting women's rights in political, economic, civil, social and educational fields” and to make recommendations “on urgent problems requiring immediate attention in the field of women’s rights."

Founded in 1946, the first meeting of the Commission on the Status of Women was in February 1947 with 15 government representatives in attendance. This year, in addition to the delegates from UN member states who will be attending, over 6,000 women from non-governmental organizations (NGOs) from all over the world will come to learn, to speak up and apply best practices back at the local level. The priority theme this year is: challenges and achievements in the implementation of the Millennium Development Goals for women and girls.

Members of the League were excited to be able to attend this incredible event. Following World War II, the League of Women Voters helped lead the effort to establish the United Nations. Of the roughly 1,000 letters the U.S. Department of State received a day in support of implementing the UN, about 90 percent came from League members. The League was of one of first NGOs to be affiliated with the United Nations when President Harry Truman invited the League to serve as a consultant at the UN Charter Conference in 1945.Since that time, the League has sent observers to witness UN proceedings. In 1997, the League was granted permission to submit oral and written statements to the UN in areas in which we have expertise.

Our current members serving as UN Observers, Rosalee Keech, Mary Fox, Judy Schacter and Margery Cohen and 16 League delegates attended some of the many sessions and panels that were held at the UN for the CSW, including the panel – Women Leaders in Business and Politics: Making THE Difference!, hosted by LWVUS along with the International Federation of Business and Professional Women and The Pan-Pacific Southeast Asia Women’s Association. The panel featured Dr. Jackie Blue – Equal Employment Officer Commissioner, New Zealand's Human Rights Commission; Dr. Jeni Klugman's – Director, The World Bank; Ms. Julianna Richter – Chief Operating Officer, Edelman US. These speakers shared their personal stories, as well as the impact women leaders make to positive social responsibility when in decision-making roles.

Janice Abbott, vice president of the League of Women Voters of White Plains (NY) and a LWVUS delegate to the Commission on the Status of Women stated “I was pleased with the variety of topics covered in the [CSW] presentations and how well organized the entire event was. It was interesting to learn some of the techniques used for 'global' problem solving." She continued that she especially enjoyed our presentation, “It was well moderated by Rosalee Keech and the variety of expertise on the panel was interesting and informative. Unlike the other lectures I attended, this lecture had the most relevance to my personal everyday experience and I could relate personally to many of the experiences the speakers discussed."

During the rest of the year we work actively with UN agencies, other NGOs and member states to promote women's political empowerment, democracy and preventing violence. Through the LWVUS' consultative status at the UN, we are encouraged to participate and influence strategy and outcomes, which allows us to officially "intervene" in United Nations Economic and Social Council proceedings and organized conferences and programs.