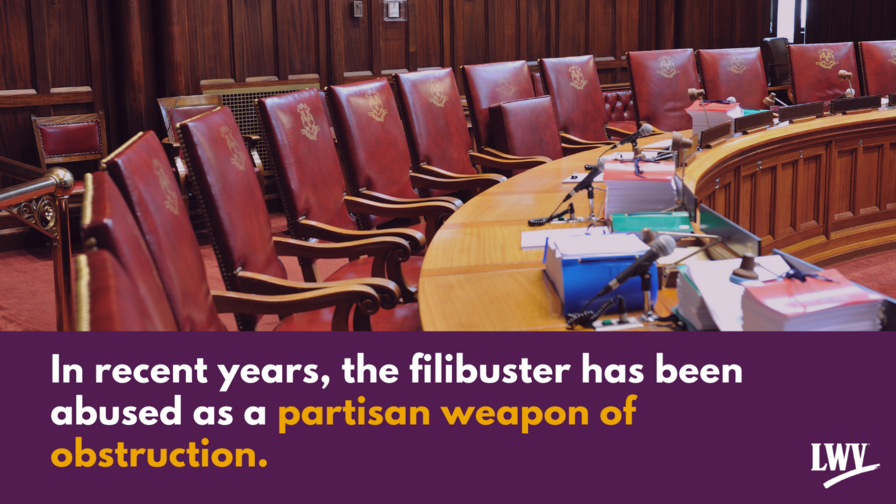 Over the past several months, we’ve heard a lot about ‘the filibuster' — and yes, I can already feel some eyes glazing over at the wonky ‘inside-Washington’ language about the Senate process. But after a historic election and record-breaking voter turnout, the American people want to see Congress pass laws that improve our lives and reflect a democracy we all deserve. Yet the mere mention of the term 'filibuster’ can shut down discussion, almost instantly, throughout Washington.

Why? The answer isn’t simple, but perhaps sharing my own exploration of what the process is all about, analyzing its historical context, discovering the different paths and options toward achieving legislative action, and finally, explaining how the League arrived at our position on this complicated tool, can be helpful to others.

What Is a Filibuster Anyway?

A filibuster is a legislative tool used only in the Senate to delay or prevent a vote on a bill, usually through extended debate.

More than two centuries ago, the framers of the US Constitution gave every state two senators. This incentivized small states to join the union, an arrangement that has always left some citizens vastly overrepresented (contrastingly, those who reside in the District of Columbia are left totally unrepresented).

The filibuster tradition of unlimited debate has allowed for action that, by design, prolongs debate and delays or prevents a vote on a bill, resolution, or amendment.

Praised as the protector of political minorities from the absolute power of the majority, or attacked as a tool of partisan obstruction, the right of unlimited debate in the Senate, including the filibuster, has been a key component of the Senate’s unique role in the American political system. The complex nature of this process contributes to its name. Derived from Dutch and Spanish words which described pirates the raiding Caribbean islands, the term began appearing in American legislative debates in the 1850s. All this to say, this thing has been around for a while and with a less-than-pristine origin story.

Even by the Senate’s own depiction, the filibuster tradition of unlimited debate has allowed for action that, by design, prolongs debate and delays or prevents a vote on a bill, resolution, or amendment. However, before 1917, the Senate rules did not provide for a way to end debate and force a vote on a measure. In that year, the Senate adopted a rule to allow a two-thirds majority to end a filibuster, a procedure known as “cloture.” In 1975, the Senate reduced the number of votes required for cloture from two-thirds of senators present and voting to three-fifths of the 100-member Senate (60 votes).

The Accidental Rule that Created the Filibuster

In 1805, Vice President Aaron Burr was presiding over the Senate and said something to the effect of, “You are a great deliberative body. But a truly great Senate would have a cleaner rule book. You have lots of rules that do the same thing.”

He singled out the previous question motion. Today, we know this as a tool that the House can use to cut off debate and go to an immediate vote. But prior to that time, neither chamber used the rule that way. Majorities were still experimenting with it.

At the time, there was a ‘gentlemen’s rule’ in the Senate to give every senator the opportunity to speak prior to any vote. Burr argued that limiting debate was therefore unnecessary. So when Burr said to get rid of the previous question motion, the Senate didn't  think twice; but by not replacing the previous motion with another rule, Burr created the opportunity for a filibuster.

How the Filibuster Works

Most Senate business is conducted by unanimous consent, a process to advance procedural and noncontroversial matters in cases when both parties have already negotiated an agreement. If no senator objects to holding a vote on a question—i.e., if the Senate grants unanimous consent—then the vote can occur right away. If just one senator objects to an action, however, a drawn-out process begins that can delay or even prevent a vote on the underlying matter.

This brings us to the second way to bring a vote to the Senate floor: the cloture rule. Cloture is a lengthy process. To invoke it, the majority must first present a petition, signed by at least 16 senators, which seeks to end debate on a matter. Then senators must wait. According to the Congressional Research Service, a cloture petition must wait “until the second calendar day on which the Senate is in session. For example, if the motion is filed on Monday, it lies over until Wednesday, assuming the Senate is in session daily.”

The Historical Use of the Filibuster: A Tool to Silence Communities of Color and Women

The filibuster has been used by both major political parties in different ways, but it “has always been used to block measures that would lead to racial equity and justice,” according to Erika May, deputy senior director of criminal justice and democracy campaigns for Color of Change, a racial justice advocacy group. Specifically, the filibuster has been used to stop anti-lynching bills, uphold racist poll taxes, and block civil rights legislation.

A recent report by Demos shows the impact that the filibuster has had on communities of color is clear and ugly:

"The filibuster is a racist remnant of a Senate designed to entrench white minority rule. It actively stifles the legislative process, and throughout history has been used to protect racial terror, like lynching, and prevent progress on civil rights legislation and other issues Black and Brown communities care about. In obstructing legislation that would advance racial and economic justice, the filibuster also undermines organizing, democratic participation, and electoral victories fueled by Black and Brown communities."

There’s little doubt that depriving certain communities of their rights will  have negative  impacts for decades to come.

The League strives to ensure that our government works as effectively and fairly as possible at every level. Though issues like Senate rules and appropriations may not sound “sexy,” League members and the public recognize these rules as essential to the functioning of American democracy.

In 2011, the League called for reform of the rules governing the US Senate. In place of a deliberative process that prioritizes open debate, accountability, and cooperation, the Senate descended into gridlock and partisan warfare at great cost to our nation. The unprecedented use of the filibuster and so-called “holds”—when a single Senator grinds Senate business to a halt by denying unanimous consent, often done in secret and out of the view of the American people—did a grave disservice to our democracy. The League called upon senators to reform the Senate rules in a way that would maintain the chamber’s best traditions and end the needless obstructionism.

In 2013, the Senate reached a modest agreement to amend the filibuster but failed to go far enough in not have long-standing reformation.

With a decade of Senate reform activism in our rear-view, the League is confident in our ability to continue to act on behalf of voters. Yes, we still proceed with caution. After all, the League’s reputation as a nonpartisan organization is unwavering, and we fully recognize that any change to Senate rules has consequences for the future of our democracy. But our country cannot move forward on vital issues to all our people until our government is freed from this gridlock. Therefore, the League of Women Voters is steadfast in our support of filibuster reform.

Why the League Supports Filibuster Reform

The League believes that the best course forward for the Senate is reforming the filibuster. It is clear that in recent years the filibuster has been abused as a partisan weapon of obstruction that stifles bipartisanship, deliberation, and public debate.

The League supports reforming the filibuster to prohibit the minority party from blocking the opening debate of a bill. We support instituting a ‘talking filibuster,’ ending silent holds, putting the onus on the minority party to produce 40 votes, and lowering the cloture vote threshold to bring bills to a final up-or-down vote on the Senate floor.

The League has a decade-long history of supporting filibuster reform to ensure a functioning democracy.  We cannot ignore the fact that the filibuster is a relic of the Jim Crow era with a long history of being used to defend slavery and preserve segregation, block civil rights, and otherwise deter progress for our democracy.

The American people elected Senators to legislate, and they do not want to see insider tactics prevent Congress from doing its job. This outdated rule, when used to obstruct, does a disservice to our democracy, and it is time to amend the filibuster to ensure our government can govern for the people.

It is time to be brave, America. Together, we must recognize and acknowledge our history and the trauma it has caused for so many, and we must own that history as we move forward. We must choose to authentically move away from the idea of scarcity and the notion that there is not enough for us all. Instead, we must lean into the abundance mindset and radically believe that we all belong, that we all deserve the right to full access to life, liberty; and the pursuit of all the happiness that our amazing country can provide. Now, let’s get to work on fixing democracy.

How much do you know about the filibuster? We've designed a quick quiz to help you brush up on your intel.